TOO POORLY FOR SSB

I had a few things planned for this weekend, but on Friday night I started to feel unwell with cold symptoms, so I had an early night in the hope of feeling better Saturday morning. Unfortunately, I just felt worse and started with a sore throat too.

So I went into the Shack and started on a job that's been hanging over me for a good few days now - putting together a speaker-mic for my (truSDX). A kind soul had 3D printed a special connector for me so it was time to fit it. 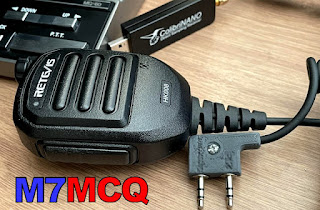 I tested it briefly on SSB and using just 0.5W and a 9V PP3 battery on the radio, I managed to get a 55 report (albeit from a UK station G0OOQ). I also received an email from M7PJD (Patrick in Westcliffe-On-Sea) to say that he also heard my 0.5W transmission very well.
I then tested the mic using the HackGreen WebSDR, which is a very useful site for me. It all sounded pretty good, so I was pleased with the outcome. The Retevis speaker/mic is a bit on the large size, but it has great volume which is adjustable with the dial on top. 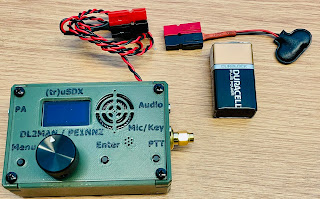 The bands were very much in full swing this weekend and although I wanted to do some SSB work, my croaky voice wouldn't really permit it, so I switched to FT8 and managed to work seven bands! 10,12,15,17,20,30 and 40M.  I also tried 80M but there was no one on during the day and I couldn't be bothered during the evening, due to feeling grotty. 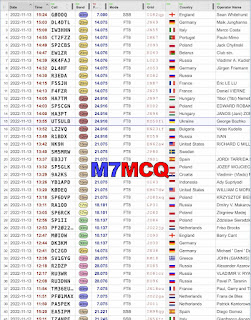 I was particularly pleased with my -09 report from Indonesia 7,500 miles away! Thanks YB1APD. I was using my simple EFHW antenna which is only 20ft up in the air. The transceiver was the wonderful QRP-LABS QDX - a beast of a machine for FT8 work.

People think that FT8 is robotic and laughably easy, but I certainly don't think so - certainly not at QRP levels. It can often be very hard work to complete a QSO for the log, involving multiple attempts. But that's also what I like about it - the chase - the fight.

Thanks for visiting my blog! If you have any comments/tips, leave a comment below with your CallSign.

Very nice Tom, heard good things about that truSDX transceiver. If you want to make a sked on 80m for example in the evening I'm open for it. I absolutely agree with your FT8 experience. Even with 100W it can be difficult at times. Really, you can't imagine how many radioamateurs are using 400W FT8 or more (over 1KW). I think of the years before the invention of FT8 when JT9 gave me much joy making 5W contacts to Japan. Just like you did with Indonesia. 73, Bas PE4BAS

Good morning Tom hope you are feeling better, yes it's nice to have some small projects on the side to keep your mind off not feeling well. Very nice work getting YB1APD at QRP levels nice work.
73,
Mike
VE9KK