When I started as a licensed operator, I was eager to find some sort of 'benchmark' so that I didn't make a newbie error and buy a duff radio. It didn't take me long to find the Sherwood Engineering Table.

At the time, this seemed like the be-all and end-all, so I gave it much credence and considered it to be more important than the opinions of YouTube reviewers (many of which were financially invested in their suppliers).

Over time I got a little wiser and it was when I purchased a Yaesu FT-DX101D that I realised there was so much more to buying a radio than an RMDR figure from a lab-test!

It made me ask myself a question relating to some older radios I'd either owned or used. The question was simple - did you consider that radio to be a really good receiver??

I'm sure that having the 'top-spot' in the Sherwood Table makes for great sales, but it certainly doesn't relate to a great operating experience! I very much disliked the FT-DX101D and ended up going back to an IC-7610.
As far as I was concerned, the two receivers (or should I say four, lol) had nothing between them - they were both superb - it all came down to preferred features and operating methods - and for me, I thought the Icom was the much better radio.
I don't doubt that if you sat down a few operators in front of an FT-1000MP Mk5, they'd be swooning over its superhet sweetness and yet it sits in 107th place in the Sherwood League. 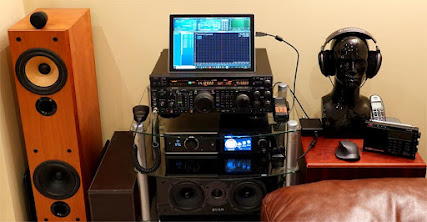 My little KX3 sits 10 places higher than my IC-7610 😮 Is it the better radio? I don't think so, 😂. These are just lab-numbers. Sure, they matter in terms of manufacturers trying to make constant improvements and after all, you can't improve if you don't measure.
But I have now come to realise that the Sherwood Table is not something I should refer to when considering the purchase of a new radio.
UPDATE
Even though the FT-DX101 is at the top of the Sherwood Table, here's what people have said....
"I've tested extensively, hours and hours, the 101d against the 7610 in the last CQWWCW, in very crowded bands and with all the filters and all sort of conditions, above all comparing side by side very weak signals very near to very strong signals. NO differences at all.
The 101 could not receive a signal better than 7610. In fact, the 7610 could receive the signals easier, faster, without so many adjustments. Icom 7610 offers much more (best waterfall, better software, more realiability, easier to get good results, better audio, with more bass and smooth, clean, soft sound, LAN, i/q output, play/record, menu system easier, parameters more adjustable , better noise blanker, etc, etc).
ROB SHERWOOD (Sherwood Engineering)
The FTdx-101D measured better than the IC-7610 on one measurement only, dynamic range because it has a roofing filter.  My three 7610's have never been close to overloading from a local signal let alone a skip signal.
I spent the last two contest weekends (ARRL 160 and 10 meters) doing A/B comparisons between the 7610 and a K4D.  Both are direct sampling and by definition no roofing filters.  The 7610 won hands down on CW and SSB.  Thank goodness modern radios are firmware upgradable for feature improvements and bug fixes. The latest update to the 7610 (and other Icom transceivers) was the new scroll feature. This was a massive improvement for a contester the way the waterfall no longer smears / skews off at an angle when tuning.
So Rob Sherwood himself has THREE IC-7610's!! I guess that speaks volumes about the value of the table in the "real world".
Your comments would be welcome.
2e0fmi
Posted by MadDogMcQ at 16:21

Good morning Tom, like you, I too was hooked on the Sherwood tables at one time. Then over time I came to realize as you said it's not all about the numbers. The numbers do help, but they are not the be all and end all. I too very much like my 7610 but having said that the Elecraft K3 I had beat hands down the 7610 when it came to contesting and really close signals. That being said, 7610 is very good at close signals....it's not a K3 BUT in my humble opinion the 7610 for me is a much, much better radio.
It's a trade-off with specs and what it is you are looking for and need in a radio.
Very nice post,
73,
Mike
VE9KK

Since I have no money for a IC-7610 I prefer the IC-7300. The difference between the IC-7300 and my old IC-706 is huge. Especially the receiver is much better in rejecting strong nearby signals during contesting. I once had the opportunity to test both the KX3 and the 7300 during the same contest. Personally I found the IC-7300 much more pleasant to listen to. 73, Bas

Hi Bas, hope you're well. Yes, the 7300 is a brilliant receiver! Probably Icom's biggest success ever. When you were listening to the KX3, were you using the internal speaker? It is truly DIRE lol.