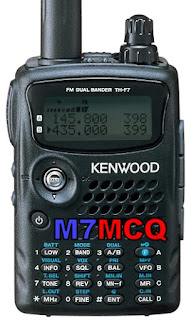 If you're on the hunt for a very cheap, value-for-money handheld transceiver, you'd do well to consider the discontinued  KENWOOD TH-F7E. Of course there's lots of HT's out there on the second hand market, but the feature which makes the F7 stand out from the crowd (apart from its low price) is its wideband rx and its ability to receive HF SSB!

The radio is an FM DualBand 2M/70cm transceiver with a 5W output. It's capable of listening to two separate frequencies at the same time (even on the same band). The ultra-wideband receiver has a wide range of modes including AM/FM/FM-N/FM-W/SSB and even CW!

There's also a wide range of tuning-steps including a very fine step for accurate SSB tuning. Inside the unit is a ferrite-bar for AM Broadcast listening - something which is often omitted in other handheld radios of this type. The only other HT I've owned with a built-in ferrite antenna was the Kenwood D74 (which cost me an arm and a leg).

With two bands available (Main-A and Sub-B), you can monitor any two frequencies of your choice, or if you prefer, you can de-clutter the screen and just have one band active. The Main-A band provides full TX/RX on VHF and UHF, while Sub-B provides RX only from 0.1~1300MHz in any mode.

In addition to the 'rubber duck' and ferrite antennas, Kenwood have made provision for an external antenna to be fitted which makes it very convenient to throw a long wire into a tree and massively improve your SWL capabilities.

Needless to say, this old-timer does not offer any digital modes, so if you're looking for some action in the DSTAR/C4FM/DMR fields, dig deeper into your wallet!

The real beauty of this radio to me is its size and durability. It's tiny and it's tough! And that means it's going to go with you much more often than a bigger radio - especially because it's got such a wideband RX. Okay, so it won't win any awards for selectivity or sensitivity, but if you're out and about up in the hills, it's perfectly adequate and more so with a simple wire connected to it. The radio also suffers from some birdies and these are actually mentioned in the manual. But all in all, it's a great little receiver - especially for this amount of money.

I walked the dog the other day and slipped the F7 into my pocket. I also took a small retractable wire antenna. I knew there was a competition going on and once on top of Winter Hill (just a couple of miles from my home), I threw out my wire into a nearby bush and heard scores of loud, clear stations from all over Europe, Asia and even America on SSB. I could also detect weaker signals but it was much harder work deciphering what they were saying, especially with their accents and the pileups and qsb.

The radio benefits from really good construction methods and it feels incredibly tough (MIL-STD 810 C/D/E) - you certainly don't fuss over it like you might do with other radios. It's also showerproof which is a great thing when you're out and about walking. All the buttons have a very positive feel to them and the Multi-Scroll key makes easy work of the menu system. The only negative here is that there's no illumination for the buttons. The internals of this little marvel are regularly applauded by technicians for the very high quality design and manufacture.  "This ain't no Baofeng" 😂

As usual from a Kenwood radio, the audio from the small speaker is pretty darned amazing. I just wish that other manufacturers would learn from Kenwood in this respect. My Elecraft KX3 for example has terrible audio from the loudspeaker and they simply advise you to use a headset instead and to treat the speaker as an emergency backup! That's ridiculous when you see how well Kenwoods sound - even at this diminutive size.

Battery life (1500mAh)?? Well it's pretty good actually. Even though it's not like the modern batteries of today, it really does surprise you how long it lasts, so much so that I'm not even thinking about searching for battery options.

Finally, this radio has over 400 Memories available for programming and with its fast scan-speed and wide coverage, it makes an excellent Scanner too! Scanning the AirBand produced good results but I would say not quite as good as a dedicated AirBand receiver. Still, most people would be using an AirBand scanner at and Air Show or close to an airport and in those circumstances, it performs flawlessly.

I bought my first TH-F7E from eBay for the princely sum of £75 including carriage. It came with all the original bits and bats, manual and even the original box.

So there you have it. An excellent little radio for the Radio Ham or the SWL.

Leave a comment below if you have experience of the F7...