I've got all sorts of fixed-length and telescopic antennas lying around the place and it's got to the stage where I wanted something decent. It had to be relatively compact, offer some gain and be a quality item, built to last. In the end, I plumped for the RH-770 from Japanese manufacturer Diamond. 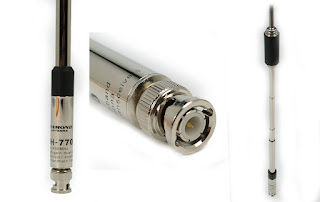 The RH-770 has upper and lower sections with a centre-loaded coil and comes in a pretty tough plastic carry-case. In theory it provides a gain of 3db on 2M and 5.5db on 70cm. That's not bad for a simple telescopic in my opinion.

Although this is a quality item, it's clear that it's not really intended to sit atop of handheld transceiver! These things are far too vulnerable to accidents for that sort of operating environment. They're much better suited to more static operations such as SOTA or POTA where you're generally sat down and settled with your radio equipment and not moving around. Very long antennas on portable radios always puts strain on the solder-joint of the radio's PCB.

The RH770 isn't different to any other telescopic in that care is needed when extending and retracting. It's vitally important (for long life) that the operator exercise caution by not being over-zealous when pulling out the sections to the limit. It's even more important to retract the antenna by putting the thicker sections away first. Forgetting to do that may result in a breakage to the thinner sections of the antenna.

One of the first things I did with the RH770 is connect it to an antenna analyser to see how resonant it was at different lengths. For this I used my NanaVNA-F and mounted the RH770 on a small tripod. 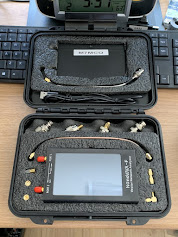 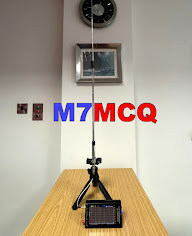 The test started with the antenna fully extended on the UK Calling frequency of 145.500. The result was a solid performance - 1.1:1 VSWR. If you touch the antenna, the SWR actually drops, so maybe I'll try attaching a counterpoise wire. 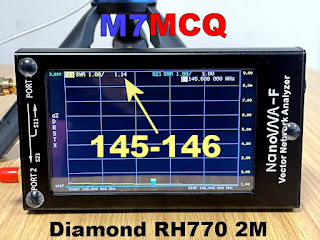 Before I mention the UHF figures, I should point out that I'd been watching a YouTube Video about the RH770 where a guy was using the antenna on 70cm with the top section fully extended and the bottom section only out about 10mm 😮
That seemed a bit daft to me, but I figured he knew what he was doing, so I tried the same and then told myself to stop being silly and leave the antenna fully extended on both bands. That was, after all, what it was designed for and the reason that it had a coil in the middle.
Needless to say, fully extended on 70cm (focused again on the UK Calling Frequency of 433.500) the antenna returned a VSWR figure of 1.2:1 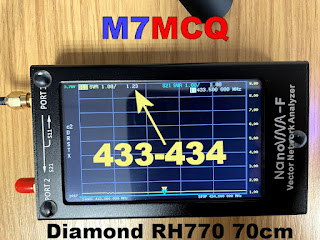 Those figures are more than acceptable and I'll be testing out the 'real world' performance of the RH770 out in the field this weekend with the ICOM IC-705.
More soon.
73, Tom, M7MCQ.
Posted by MadDogMcQ at 14:32