Which Radio Should A New Ham Buy?

I've never been asked this question personally but I've seen it asked over and over on forums and Facebook Groups, so I thought I'd write about my own views on it - after getting it so wrong myself!
Before I start though - let's state the obvious - your very first consideration should always be your antenna! Spend the biggest part of your budget there and not on your radio. If you can't have a big multiband yagi because of local restrictions, then consider a wire dipole or an EFHW. If none of those options are possible, perhaps you could install a good quality vertical. Personally, I went for an EFHW and love it.

When I got my Foundation Licence, I convinced myself that I needed a big HF rig and a great handheld. I actually ended up buying a Kenwood handheld and a Yaesu base-station.  Then I added an RSP1A for a panadapter display.

I tried allsorts over the coming months and wasted a lot of money swapping and changing. 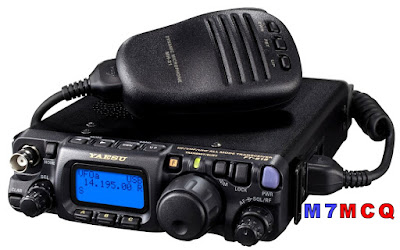 It wasn't until i bought a Yaesu FT-818 that I realised what a fool I'd been buying all the other radios. I should have bought one of these amazing rigs right from the get-go!  Originally I had searched for a used FT-817 but soon realised that there's thousands of them for sale out there, but A) they're quite expensive and B) they're quite old!
What's the difference between an FT-817 and FT818? Well they're virtually identical but the newer 818 has 20% more power output, an accurate TCXO and a much better internal battery. Additionally, it has better internal shielding and bonding. Some 817 owners were very disappointed when Yaesu introduced the 818, hoping for a radically new radio, but instead they got an improved version of what was already a fine rig. As a result, you'll hear some foolish claims that the 817 is a better radio, lol, such is their disappointment in not getting something altogether different. The simple fact is, the 817 is a great radio and the 818 is greater.

So in the end I bought an FT-818ND. It's a beautiful little thing and it feels amazingly rugged and reliable. There's nothing flimsy about it and it very quickly feels like your old mate! When it's tucked away in your rucksack waiting for the next outing, you kind of miss it - even though you might have a fancy-schamncy base station in the shack - this lil gal keep on calling your name.

So, for a newly licenced ham who doesn't want to spend a fortune, I would strongly recommend an FT-818 as your first and only radio. Yes, I know they're not exactly cheap, but believe me, you could waste an awful lot of money on inappropriate equipment that amounts to 2 or 3 times the cost of an 818.

With the FT-818ND, you can operate on HF 1.8 MHz - 54 MHz, VHF 2M, UHF 70cm. You have 6W output power and can easily connect a linear amplifier to increase power when you become licensed to do so.  Although you may think 6W is a bit limiting, believe me, many QRP operators (yes, you are a QRP operator whether you like it or not) reach amazing distances on 6W and less!

The 817/818 not only allows you to work all the bands, but it also let's you work them in any mode you like too - CW, AM, LSB, USB, FM, PACKET. You can get up on your local hill or maybe get to the beach and make some amazing contacts in your log-book on minimum power. There's no better feeling than breaking through a pile-up with a couple of watts (or even milliwatts). Just a note here for the newcomers - when calling CQ or breaking into a DX QSO, it's always worth mentioning the fact that you are using low power - QRO operators always seem keen to help out low-power users. My CQ-Call goes like this....

Not only are you identifying yourself as a humble little QRP'er but you're also extending your call that little bit longer to perhaps be spotted on a waterfall. Don't be afraid to extend that call even further. The longer your call (within reason), the more chance you have of someone hearing you or seeing you on the panadpter and applying their filters to pull you out of the noise.

The FT-817/818 has an antenna socket at the front (BNC) and one at the rear (SO-239) so you have plenty of options. I usually use the rear socket with a Linked-Dipole resonant on 20 and 40 metres. Occasionally, I'll use a simple telescopic antenna on the front socket on 15M, 17M and 20M. The Elecraft AX-1 is the perfect antenna for this, although there are other mono-banders available too.

THERE's NOW A 40M COIL AVAILABLE
AS AN ADD-ON!


And it gets better! Whilst on holiday in the county of Northumbria, I had a few QSO's on 2.5W using the FT-818 and a SotaBeams Linked dipole. Two of the chats were with American operators KE5EE and WD4NGB. KE5EE gave me a 'genuine' 55 report and he was 7,000km away - that's 2800km/W. 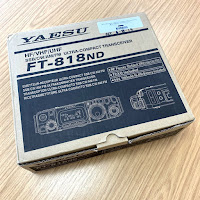 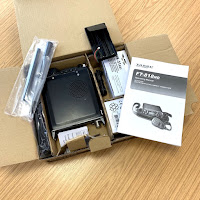 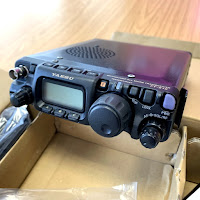 The radio itself is very straightforward to use and although it's menu-driven, it only takes a week or so to become totally comfortable with it. If you're a bit of a luddite and against menu systems, then don't bother with an 817/818. In my opinion though, you'd have to be pretty dumb not to get along with the radio's way of operating. After all, the most important things like tuning, switching bands, switching modes, etc, are all on the front panel.

Although the 818 comes with an internal Lion battery, I would recommend that you invest in a nice little LifePO battery around 4800mAh if you want to spend the whole day TXing in the hills. It's a very worthwhile investment!

Another great investment would be an LDG Z-817 or Z-100 PLUS ATU...
With one of these you can use a random long wire or an End Fed Half Wave which covers multiple bands. The Z-817 is designed specifically for the little Yaesu, whereas the Z-100 PLUS can be used with virtually any radio and it can handles 100W, despite it diminutive size.

There's nothing much that the little 817/818 can't do and as an owner, you are in the company of many others who've gone down this path. Owning an 817/818 at one time or another has almost become part of the hobby, lol. You'll have great fun with it at a variety of locations and events, including your shack. A small amp will permit the use of your full 10W and a bigger amp will give you room for growth when you decide to upgrade your licence. 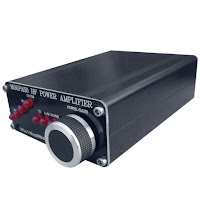 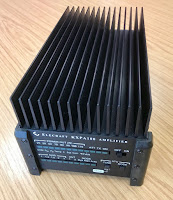 So there you have it. A true shack in a box - in a neat, compact body. Tough as old boots, reliable and functional on almost all the amateur bands. Get a "handbag" case for it and you can take it anywhere with you.

And bear in mind that if you decide you want a big radio in a few months time, you can always sell your 818 and get very good money for it! They really do hold their value (as you'll see if your try to buy a used one). The chances are though, you'll want to keep this little beauty forever! 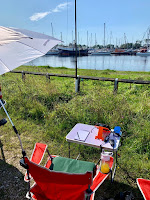 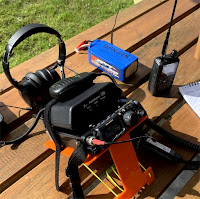 A lot of folk can't afford to splash out so much on a shack in a box (mortgages, kids, etc) and seek a cheaper alternative. To those operators, I would suggest considering the purchase of a Baofeng UV-9R dual-band HandHeld to cover 2M/70cm and then look at a Xiegu G90 for HF. I have both these radios and there's simply no denying the amazing bang for the buck! Especially the G90 - WOW! 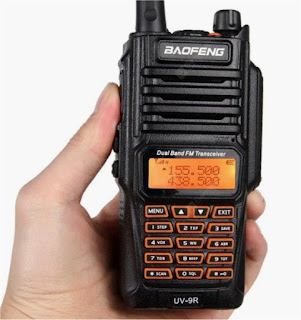 If money isn't an issue, you might want to consider the top shelf ELECRAFT KX3 complete with internal tuner and 2M transverter for around £2400.
Or for half that price, consider the ICOM IC-705. I recently switched to a 705 and I have no regrets at all. In fact, if you have a budget that reaches this level, I'd recommend the IC-705 all day long! The more time I spend with this radio, the more I absolutely LOVE IT but of course £1300 is a lot of money.
Then there's the amazing ICOM IC-7100 which is probably the only radio in the world which gives you HF, 6M, 4M, 2M & 70cm. I just love these radios. And you can get hold of a mint one for as little as £650. 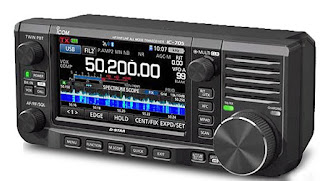 💗 ICOM IC-705 💗
STEVE NORMAN from the Facebook Group - Amateur Radio UK - suggested an FT-857 or FT-897 as a first radio, saying it's all-band, all-mode, 5-100W and therefore future-proof. That's a good point. I've had the FT-897D and it was a cracking radio but you can't buy them new any more and need to keep an eye on the age of second hand units, for fear of buying an ancient rig. They're not very portable either - well you're certainly not gonna chuck it into your rucksack, lol. The 857 is kind of in-between the 817 and the 897 in size. Again, 100W but more suited to a car.

NIGEL BROOKS from the Facebook Group - Amateur Radio UK - suggested an FT-840 which obviously suits his interest in HF, but it doesn't operate on VHF or UHF. And it's pretty much limited to home use, being a base station.

SO IN SUMMARY, based on price alone....
Thanks for visiting - please take a minute to leave a comment below
73, Tom, M7MCQ.