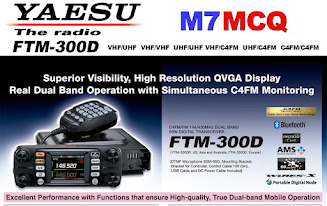 YAESU'S LATEST MOBILE VHF/UHF/FUSION transceiver will probably be remembered for being one of the few new radios to hit the shops during the 2020 Covid Year! Well, maybe that and the IC-705 if it makes it to the stores before another outbreak cripples the world's supply chains again.
The FTM-300D appears to be a replacement for the FTM400 although no one at Yaesu is admitting that yet, since there are probably still a few thousand of the old units to sell. Although I personally don't think it's as attractive to the eye as the 400, the 300 certainly is a welcome update and it offers me something that my old 400 never did AND it does things which my 991A doesn't do.
Because I like to use the WIRES-X software in the shack through my computer, I had no choice but to buy the FTM-300 because my only other option was to tie-up my handheld FT3D which seems a little crazy.
So here we are at the end of July 2020 and looking around all the UK supplier's websites I can see that there's no stock! Well actually, LAMCO showed them being 'In Stock' but a quick phone call produced the usual "Oh sorry, the website mustn't have updated itself'. So with no option but to wait for a new batch to enter the country, I placed an order with Martin Lynch & Sons. 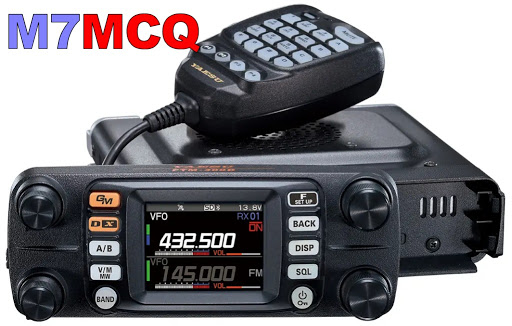 10 days later, the unit arrives (thanks ML&S) and I quickly unbox it and store the packaging in the attic with all the others. The main unit looks very similar to the FTM-400 base unit and it even fits inside the company's cooler unit (SMB-201). But hold on - it turns out that the FTM-300D wasn't designed to be connected to the SMB-201, so I had to find some alternative screws to 'make' it fit. After a little faffing around, it's sorted. Apart from providing additional cooling when required (it gets incredibly hot in my shack during the summer), it also provides the 300 with a bit more heft when used in the shack and stops the radio moving around on the shelf where it lives. 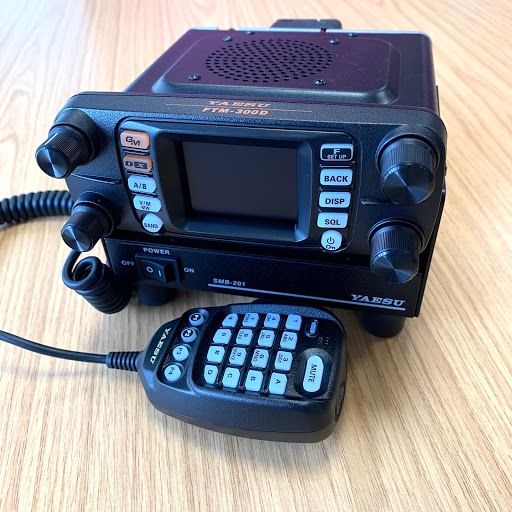 Putting the FT3D next to the 300 it would appear initially that Yaesu had shared the same screen - which would have been a good thing - but sadly the 300 isn't a Touch-Screen. Why?? Not a clue - seems crazy to me to invest in the creation of a nice touch-screen and then not utilise it in your other radios. Go figure.
Whilst lacking the benefits of a touch-screen, the 300 is nice and easy to operate. The buttons on either side of the head unit are clearly marked and make complete sense, as do the rotary controls. The menu system (what they call Easy To Operate (E2O II)) is intuitive and doesn't give you that 'bogged down' feeling when you're trying to reach a particular setting.
One of the very best features of this new radio is the true Dual Band capability which is achieved by the inclusion of two independent receivers which means that you can not only monitor two separate bands, but can also monitor two different parts of the same band. In fact, you can even monitor two C4FM frequencies!!
VHF/UHF  VHF/VHF  UHF/UHF VHF/C4FM  UHF/C4FM  C4FM/C4FM
That's great news! But you can also switch on the CrossBand Repeater function. This won't work in C4FM to C4FM, but it will work in one analogue mode to another analogue mode, or even C4FM to analogue mode. It basically receives on one frequency and instantly re-transmits on another (FM) frequency.  Cool! 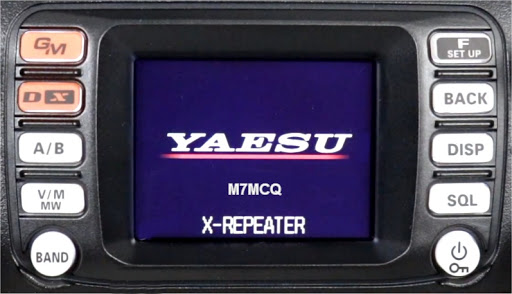 The radio has 50W power on all bands with options to reduce that power to 25W or 5W. I've not tried it yet, but I think there might be a way to modify those settings (using the hidden service menus) so that you can get a 10W setting, which would make much more sense to Foundation Licence holders.
The FTM-300D has well over 1000 Memories and a small number of your favourite stored memories can be arranged into a special group which can be put into MCS mode which monitors them in the background and then stops when it finds an active frequency to allow you to communicate if you wish to. I've not spent much time with this feature, but in my mind, it's like having a number of Priority Channels that you'd like to monitor even though you might be doing other things on a different VFO.
Another great feature is the BandScope which in VFO Mode will show activity on 30 channels either side of your tuned frequency. It will do the same in Memory Mode but only 21 memory channels at a time. 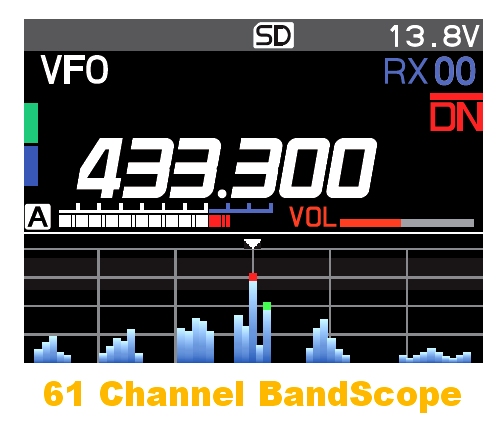 The RX audio sounds pretty good and I'd say there's no need for an external speaker unless you want to alter the tone to better suit your hearing. It's pretty loud too with a 3W speaker which is mounted to the top of the base unit.
Other sophisticated features include Yaesu's AMS mode, DG-ID and GM (Group Mode) which make good use of the radio's built-in, high-precision GPS. That GPS is also used by the radio's APRS communication system. Whenever you transmit to someone in C4FM or DV mode, your GPS Position is also transmitted and their position is received, allowing navigation to one another.

The head unit can, of course, be separated from the main unit and mounted in a different location which is handy for use in the car and in some shacks. The radio has a welcome SD CARD facility and I'm pleased to say that they've placed it on the head unit which makes it much more convenient to access for those occasions when you want to remove it. You can use a card up to 32Gb.  The radio can record your QSO's in .wav format - that includes your speech and that of the other operator. On a 32Gb card there's room for many hours recording. 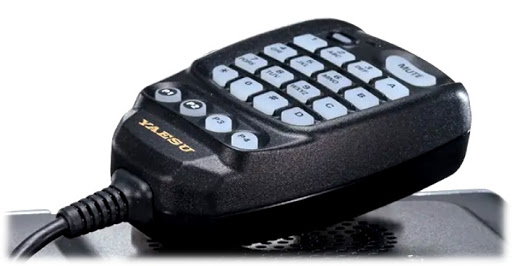 The supplied microphone is like no other Yaesu mic I own and it feels comfortable in the hand. Unsolicited audio reports at this early stage have been very complimentary. I like the large MUTE button at the top of the mic - I find it very handy. Another nice feature of the FTM-300 is the built-in BlueTooth which works very well with Yaesu's own BT Device but not so well with any others I tried. The good thing about Yaesu's SSM BT-10 is that it works very well with both my FTM300, my FT3D and even my Icom IC-705!! Understandably, audio reports using the bluetooth mic aren't quite as complimentary but there's been no complaints either. 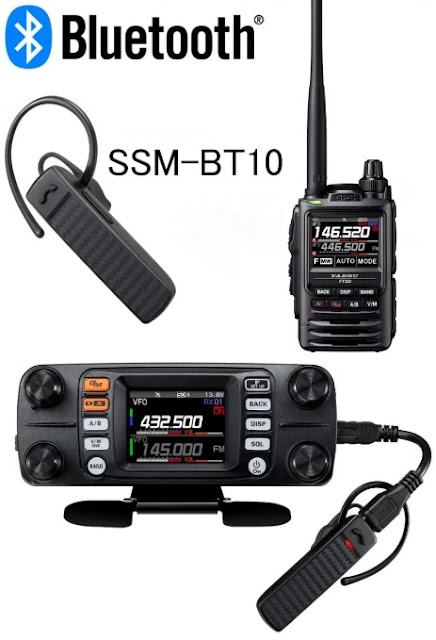 So there you have it, it's a great little radio and I really am very pleased with it thus far. It's great to have DualBand back in the shack after selling the Alinco DR735 - I really missed that.
The FTM-300 is easily the more up to date and higher-spec radio when compared to the 7yr old FTM-400, but understandably, some people will want the bigger touch-screen of the 400. Personally, I much prefer the great feature of being able to monitor 2 C4FM rooms (say NWFG and CQUK), something the older 400 just cannot do.
I'd also prefer to have the wider receiver coverage and the built-in BlueTooth. The 400 also lacks the very useful Memory Groups of the 300 and the SD card location on the head-unit.
99% of the time, this little beauty will be connected to a PC and a dummy load running WIRES-X, because my main VHF/UHF radio is the IC-9700, but occasionally I'll switch the antenna over to the FTM-300D to benefit from its wideband receive.

REMEMBER,  these are just my own personal opinions and I fully understand that others may prefer the 400. Someone pointed out that they like the 300 for in the shack and the 400 for in the car. The bigger screen in the car makes sense.
Thanks for visiting - please take a minute to leave a comment below
73, Tom, M7MCQ.

Can you tell me how you got it to work with the SMB-201 cooling fan please? I want to do the same thing.

Hi 'Unknown'. It was quite easy to fit the SMB-201 - I simply rummaged around my allsorts box until I found screws to match the thread of the radio. Having said that, I have NEVER had to switch the SMB-201 on, so it may have been a waste of money, LOL.

I, too, am interested in how you were able to mate your SMB-301 to your FTM-300. The FTM-300 doesn't have screw holes in the side of the radio body. I'm curious what your little screws that you found are attaching to in order to secure the body to the upper panels of the SMB-201. Can you show any photos of that? (You take great photos, BTW.)