I've been after a WSPRLite Flexi for months, but they've been unavailable on the SotaBeams website with no stock-update available. Presumably it's due to the global shortage of components. I saved a search for one on eBay but have received zero notifications, so obviously, when someone buys one, they tend to keep it!

Thankfully though, I popped onto HamRadioDeals at lunchtime and was lucky enough to catch an advert which was just minutes old! I quickly messaged G7UFO and snapped up this rare little beauty. The sale included a 3 BandPass Filter board which saves me some money.

So what is a WSPRLite?? Well it's described as an Antenna Performance Analysis System. It's basically a tiny test-transmitter (or beacon, if your prefer). You can attach it to your antenna and leave it running over a period of days (up to 45) and it will transmit up to 200mW WSPR signal every couple of minutes and hopefully be picked up by WSPR beacons all over the world. You can then go look at how well your antenna performed on DXplorer.net.  You can also use it for real-time propagation reports and that's probably going to be its biggest use by me. You can use this system to spot openings for rare DX. If someone has heard your 200mW signal (or less) thousands of miles away, there's a good chance you can have a qso with them at 'normal' power levels on your transceiver! 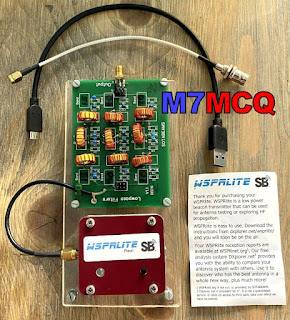 The unit is roughly 2" square and has a micro-USB for power/programming at one end and a female SMA antenna connection at the other. That's it! Unlike the earlier version (the classic), the Flexi has no passband filters inside, so it's recommended to introduce some externally and SotaBeams facilitates this with a PCB kit which allows you to decide which filters are important to you.

The board which came with mine has filters for 80M, 40M and 15M which isn't what I'd have chosen, so I've ordered another board to give me 20M and 10M (it includes 15 by default so I’ll be doubling up, I know).

The previous owner mounted the WSPRLite and PassBand onto a perspex base to keep them together and provide a stable platform. It's a great idea but I'll probably look for a different solution when I've built the second filter board. 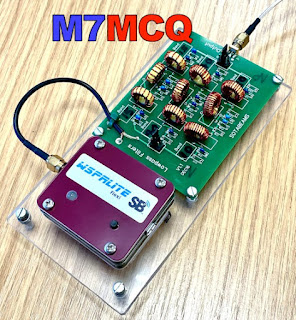 The extra PassBand Filter kit arrived along with a USB "Stay Alive" dongle. The latter stops the USB Battery Packs from falling asleep inbetween the WSPRLite transmissions. It's pretty much a necessity! 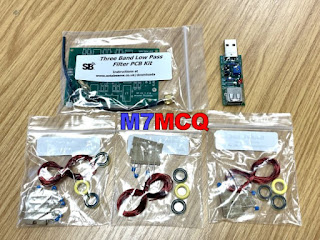 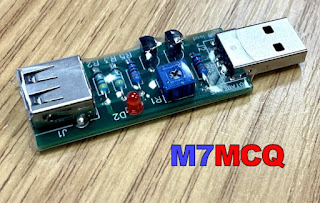 After building the kit, I decided to stick with the perspex idea for now and simply mounted the new board on the reverse side. I also put my trusty "Hot Glue" gun to good use, fixing the wobbly toroids in place. It's not pretty, but there's no point trying to make this little project look like a commercial product when it's just a tool, sat hidden in a corner somewhere, quietly doing its thing, with no operator interaction required.

For its first test I flung it on top of a bookcase in the conservatory and connected it to an EFHW which is resonant on 20M. I left it all day while at work pushing out 200mW and got the following results back...

Not bad considering the 20M band isn't particularly good right now. I'll repeat the tests on 10, 15, 40 and 80M (with the Elecraft T1 tuner inline). I'll post spot-maps on here as I get them. It's going to be interesting (to me at least) to see the differences between different antennas at the same location and same orientation. In addition to the EFHW's I will try my SotaBeams Linked Dipole, SotaBeams BandSpringer, my 1/2 size G5RV and some Homemade Verticals.
I'm particularly interested in how well the G5RV compares because it seems like no one has a good word for them and yet I've had some cracking QSO's with it even though it is sited in the worse possible location you can imagine!

Great work Tom, pleased you're getting some good use from it!