When I got my truck, I bought a radio for it but then hesitated because I didn't want to start drilling holes in it. But recently I changed my mind and have decided to fit a tiny Dual-Band Fusion rig in the form of a Yaesu FTM-7250D. 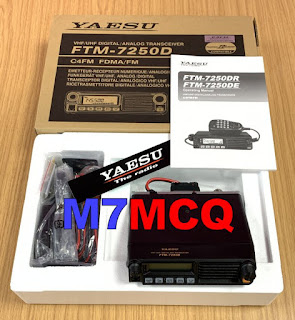 This is a very compact VHF/UHF/C4FM transceiver which will fit neatly in the centre-console of my Amorak. Despite its diminutive size, the FTM-7250 is capable of outputting 50W and a tiny fan at the rear is supposedly capable of keeping it cool. It doesn't matter to me, since I won't ever be using that much power anyway and being in a part of the vehicle with virtually no airflow, it's just as well.

The receiver has an extended range of 108-580MHz so that means it's good for listening to the AirBand (but sadly not in the Marine Band, since AM coverage is restricted to 108-137MHz) as well as 2M and 70cm.  AMS ensures that the radio automatically recognises the operating mode of an incoming signal and switches between AM/FM/C4FM without any input from the operator.

The radio's speaker is (thankfully) forward-facing on the front panel and is really quite loud (I think it's around 3W output). It's not the deepest, richest sound in the world, but it's perfectly adequate for what it's designed for.

Over 200 memories (with alpha-tagging)  makes it easy to store your favourite frequencies and then scan between them. You can also search between programmed band edges (ten of them). 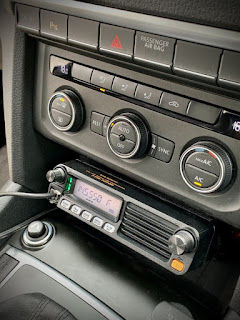 Because the truck is on a PCP, you have to be careful not to drill holes which the leasing company can pull you up about when the vehicle is due to go back. Needless to say, they take great delight in charging you a fortune for a new centre-console just because you drilled a hole in it!  With that in mind, I opted for a Velcro solution and to be fair, it worked out well.

I did have to drill a secret hole to reach a power source, but the hole cannot be seen. If I had to remove the radio, it's a simple affair but the likelihood is that it'll just stay in-situ. With the mic unplugged you can barely notice it and it's easy to chuck a dark cloth over it when parked up.

Programming the radio was achieved by using CHIRP and a programming lead purchased from TechnoFixUK which has an FTDI chipset in it. This USB lead creates a COM port in Windows. Just in case you're thinking this lead will work with RT SYSTEMS software - IT WON'T!! I'm getting a bit sick of RTS. Previously, I've used their software with my own leads but they're building in code which stops the software from even being installed until it detects their own unique cable, forcing you to spend even more! No thanks RT! 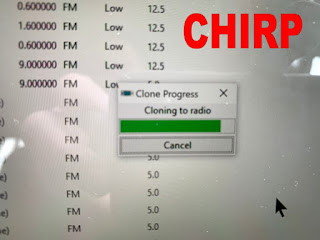 Anyway, it's real easy to program memories by hand at the front panel. You'd only need to use Chirp if you wanted to program loads of frequencies.

UPDATE :
Just got back from Winter Hill after completing some tests to make sure my programming was okay. I'm pleased to say that all was well.
At first, I thought GB7WM (our radio-club's Fusion Repeater) wasn't working because when I put out a call on it, there was no response whatsoever - not even a beep to confirm I'd reached it and opened it. So I rang a mate Carl (G0UXF) to ask him if he could hear my calls on the repeater's output.
He confirmed that he could hear me and that my CallSign was displaying correctly. Strangely though, I could not hear him when he tried to open it (although I could hear him on the input frequency directly). He just cannot open the repeater even on 50W from his QTH.
I tried a few other repeaters and all were fine. Then I tuned into my local Gateway MB6HW which is operated by my friend Bill (G4CFP). That was working superbly although I got a gentle reminder from Ian Maude (G0VGS) about leaving adequate pauses between overs in order to give the repeaters time to reset and prevent them from timing out. Ian also discussed the potential problems with simplex gateways and recommended watching a video on YouTube called THE SIMPLEX CONUNDRUM.
So overall I am quite happy with the FTM-7250 and I like its simplicity. Very few bells and whistles, cheap and cheerful. I believe they're being discontinued so I'm glad I managed to get hold of one before Yaesu bring out something that does the same thing but for more money and with more features that I don't need.
Thanks again for the help from G0UXF, G4CFP and G0VGS.
Thanks for visiting - please take a minute to leave a comment below
73, Tom, M7MCQ.