When preparing to do some outdoor FT8 up in the hills, you obviously need to think very carefully about what you're going to use as a computer to run WSJT-X. Especially considering you'll be carrying it in your rucksack along with your radio, antenna and accessories (and some food/drinks).

I have a Microsoft Surface Pro6 which would be fine, but it's just worth too much to me to put it at risk of damage or loss, so I looked around for something which had good battery life, was really light and really cheap. As usual, I started bargain-hunting!

From researching different NoteBooks, I soon learned that the ASUS E410M was one of the cheapest and lightest out there, but they're still too expensive new, costing around £250, so I searched for a used one. Within a very short space of time I found one just two miles away which was cheap and a cheeky offer made it an absolute steal!!! 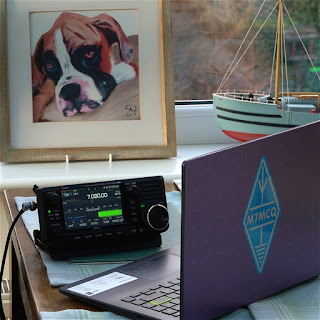 When I arrived at the owners home to collect it, she told me that it was just a couple of months old and showed me the receipt. It was absolutely like new but was too slow for what she wanted to do on a PC, so I handed over my money and headed home.

Unlike the previous owner, I didn't need a powerful machine - I just wanted something that would run WSJT-X, GridTracker and have QRZ open on a browser. This machine would do that easily, so happy days.

This little Asus is very light and has a very slim profile. The top cover has a nifty design in "Peacock Blue" which looks pretty cool and certainly adds some cosmetic value to an otherwise Plain Jane device. 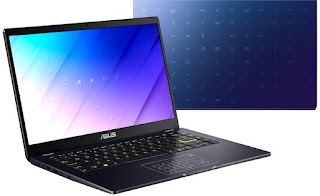 The E410M is one of the cheapest notebooks out there and is ideal for people how need a laptop style PC but don't need expensive CPU's or GFX. It's certainly of no use to gamers or video editors! But for those who want to just browse websites, watch a bit of YouTube, send emails and run basic application software such as word processors, it's fine.

It comes with a Quad Core Intel Celeron 1.1GHz processor, 4Gb DDR4 Ram, Intel UHD 500 Graphics and a 128GB M.2 NVMe PCIe 3.0 SSD. These can be upgraded at purchase point but can't be upgraded later by the user. Well actually, you can add an NVMe SSD card to provide more storage but I suspect owners of this machine rarely will do.

Also included is built-in WiFi and BlueTooth. The display is a 14" anti-glare unit with an FHD resolution of 1920x1080. The screen on battery-power is not the brightest in the world but should be adequate for the task. When plugged into the Mains, the screen is perfectly bright, by the way. The screen can also be laid completely flat (180 degrees) which might be handy for someone, but it's of no value to me. 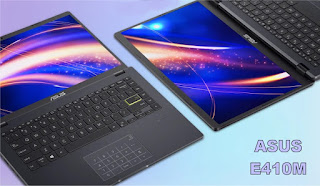 Now then, there's a bit of a funny story to this next part. When I switched the NoteBook on for the very first time, I was presented with a LogIn screen with the previous Lady Owner's name and photo. I recalled that she'd told me she had deleted all her files and gave me her LogIn Code because she didn't know how to reset everything back to factory-fresh.

So I entered her code and saw that the Windows 10 desktop was empty and only the Recycle Bin icon was left. I could also see that the Recycle Bin still contained files, so being a nosey bugger, I restored them 😂

To my amazement, I now had access to all her personal details, shopping, banking, medical, all sorts! I could go into her FaceBook, MSN, PayPal, mortgage provider, email, the lot!! I could even see what takeaway food she'd been ordering 😛

Anyway, I was just about to stop noseying when I clicked on something which took me to her more intimate areas! 😲😲😲

It turns out that she's an Escort!! So there I am looking at all these emails from married men booking time-slots with her and telling her what they're going to do, etc, etc. And then if that wasn't enough, I saw her replies to them, complete with nude images of her in errrrr, some very interesting poses and outfits 😂😈😂. 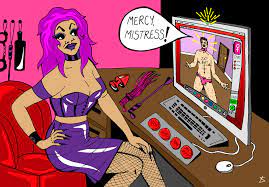 Anyway, I deleted all her files properly and got shut of her UserID on the NoteBook and created my own less sordid profile. I then sent her an email to warn her of failing to properly delete things when selling computers, laptops, tablets and phones. I told her to change ALL her passwords immediately.

She wrote back, thanked me and gave me a Discount Code 😂😂😂

So with that out of the way, I installed WSJT-X, GridTracker and the latest IC-705 USB Driver. With the radio connected and setup as a 7300 in WSJT-X, everything was up and running without a hitch. I only did a quick test on the EFHW because it was getting late (after looking at all those computer images) 😅 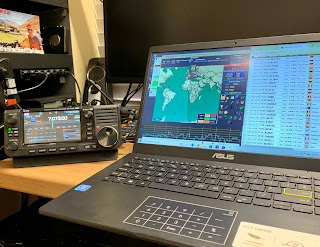 One thing that I did notice, was the Temperature gauge was showing 15 bars which is far higher than the 7300 goes, but then again this little rig was running at 100% power where the 7300 only runs at 10-12%. 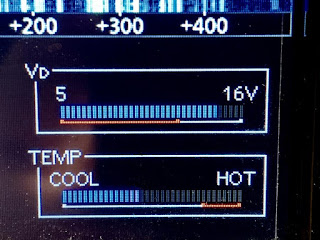 I'll try it outdoors at the weekend if it isn't POURING WITH RAIN like it currently is.

Take care (of your data).

UPDATE : I tried to run the RS-BA1 (V2) software on the little NoteBook and it worked a treat - even with the scope switched on!! Everything worked perfectly well with no issues. I must admit though, you get interruptions (break-up) if you try to run other CPU-intensive applications as well as RS-BA1.

Testing RS-BA1 on this weedy PC was just an exercise, since I'd never really use it for this purpose. For RC operation I'd probably use my infinitely faster Surface Pro. 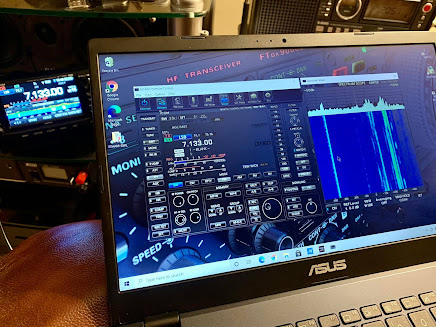 Thanks for visiting - please take a minute to leave a comment below
73, Tom, M7MCQ.

Very nice Tom, I wonder what you will do with the discount code ;-)
Did you know you can connect wireless with your IC-705...for me that is the ultimate portable setup. I'm glad Icom does listen to their users...
73, Bas

Yes Bas, I've become a bit of an Icom FanBoy these days :-D

Thanks for popping in.