I mentioned this subject previously within a different (and looooong post), but thought it might be worthwhile giving it its own page so that it's easy to find and easy to link to when need be.

When I moved into my little bungalow, it wasn't long before one of the neighbours decided to complain about my colinear which I'd erected at the peak of the roof. Bear in mind that this isn't some great big multi-element Yagi - it's a discreet white stick and doesn't cause any harm and isn't unsightly.

Of course the complainant never knocked on my door and discussed her unhappiness with me directly - she just lodged an official complaint with Bolton Town Council instead. I wasn't even aware of it until a few weeks later when a letter dropped through my letterbox. 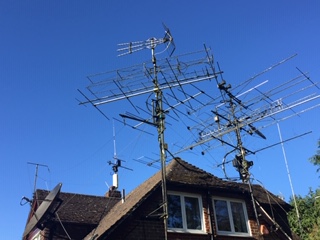 The letter provided me with a name and an email address, so I wrote an email to the lady who had carried out the inspection and explained that I was a licensed radio amateur and it went like this....

ERECTION OF ANTENNA
Hi XXXXX, thanks for writing to inform me of a potential problem with the antenna that is currently erected at my property.
I wasn't aware of any issues with neighbours - certainly no one has enquired or complained to me about antennas being erected and dismantled.
Perhaps I should begin by pointing out first of all  that I am a Licensed Radio Amateur. I was awarded a government licence after a great deal of study and sitting an examination. My OFCOM Licensed Number is AM000nnnn. I am also a member of the Radio Society Of Great Britain (RSnnnnnn) who may be called upon to help their members with issues relating to planning queries.
My license is for the purpose of self-training in radio communications, including conducting technical investigations. I may also be called upon by any government body in the event of an emergency to aid in communications. A good example of that would be the recent Moorland Fires just behind my property on Winter Hill. RayNet were heavily involved in the communication logistics. RAYNET is regarded as a professional support organisation by both the statutory and volunteer emergency service organisations.
My main area of interest is in the experimentation of antennas and propagation. Radio propagation is the behavior of radio waves as they travel, or are propagated, from one point to another, or into various parts of the atmosphere. Line-of-sight propagation means radio waves which travel in a straight line from the transmitting antenna to the receiving antenna.
Basically, this involves me putting an antenna together, erecting it temporarily (but SAFELY & SECURELY) and carrying out radio tests in multiple modes including analogue and digital for the purpose of self-education and development.
The antennas which I erect and dismantle as part of my radio propagation experiments are >>temporary<<  Sometimes an antenna might only be erected for a couple of hours!
I consider myself a very caring and considerate neighbour and am disappointed to think that I've upset someone living close to me. I do everything possible not to be visible in my activities - even going to the trouble of dismantling/erecting very early in the morning just to keep a low profile and to avoid being a distraction to people.
I would very much appreciate a meeting with you at my home so that you can explain to me what it is that I'm doing wrong and why I need Planning Permission for the temporary erection of an antenna. I have invested a great deal of money, time and effort to become a Licensed Amateur Radio Operator and I wish to stay within the rules of the local Council whilst also avoiding unnecessary restrictions.
Please feel free to ring me on 07976 --- --- at your convenience.
With kind regards,
Tom McQuiggan.

The person I emailed rang me shortly after receiving my email and thanked me for explaining everything and she said it was both helpful and informative. She pointed out to me that her job was to take a balanced view of any complaint and after reading my letter she was going to inform the complainant that no action was going to be taken.

I think this letter was successful because it was a concise, balanced and calm response. I wasn't defensive and showed genuine concern about being a good neighbour while making it clear (in a non-threatening manner) that I had every intention of continuing with my licenced hobby and had the support of the RSGB when it comes to planning issues.

I wrote this letter after taking advice from my friend Stuart (G0IUA) who suggested I mention certain things such as the temporary nature of the antenna and the self-training and experimenting). If you find yourself in a similar position, perhaps this letter will form the building block of your response to your local council.

Good afternoon Tom, very nice post and excellent way to deal with the issue. Yes sometimes those around us can complain regarding our hobby but as you say you do have the right to exercise your hobby. What I have done in the past when a new antenna goes up I move my radio off the desk and not connect it to the radio. Sometimes I don't even run the feed line to the antenna. I wait for a few weeks and see if anyone complains I am interfering with electronics in their home. I bring them over in a friendly manner and show them that no feed line is connected, and it's not me. I know yours was a visual issue but you dealt with it just great.
73,
Mike
VE9KK

Well done Tom. I hope this will be a great example for others. 73, Bas

Thanks guys. Hope you're both keeping well.