JESUS CONTACTS ME AT EASTER! 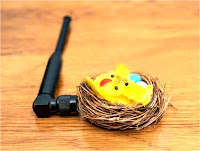 Being an atheist, I never thought I'd be making contact with Jesus, not even at Easter, but sure enough, he turned up right at the end of my hour of testing a new antenna!

Having been on "LOCKDOWN" for a couple of weeks, I started to worry about the future in terms of whether there's going to be a company to go back to and I awoke this morning from a dream where the bailiffs were banging on my door to take away my beloved radio gear!!

Anyway, I ended up getting out of bed at 05:30am and sat at the 7610 with a cup of coffee. There was an atrocious amount of noise on the bands - and little else - apart from some Europeans on 80M & 160M looking for Stateside contacts only, so I switched off and flicked through some emails on my tablet.

It was then that I stumbled upon a message from Richard Newstead from SotaBeams (G3CWI) about making my own 20M QuarterWave Vertical.

I've been meaning to do this for months and just never got around to it. I guess I didn't really believe it was going to be worth the effort considering I've already got a great 20/40 Dipole, a half-size G5RV and a superb EFHW.

Anyway, in a bid to brush off the dark emotions of coronavirus, lockdown and the end of the feckin world, I forced myself to gather together all the bits I would need to complete the project.

I had a reel of antenna-wire which I purchased from SotaBeams (virtually any wire will do), a 1:1 Balun from Martin Lynch and a telescopic mast, 6M long which would conveniently sit in a parasol-base.

First job was to cut four lengths of wire - one for the driven element and three slightly longer radials. The driven element was cut to 5.13m and the radials were cut to 5.8m. Bear in mind that I chose these dimensions to make it resonant around the QRP frequency of 14.285MHz

Because the telescopic mast was only 6M high, I decided to wind the wire around the mast in a spiral shape so that most of it was up and away from the ground (the balun ended up being about 9ft high). This gives the added benefit of having the three radials going up at an angle instead of dragging across the floor. 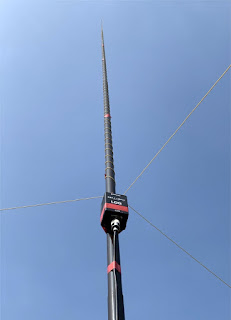 To make sure the wire stayed in the spiral pattern, I added a little insulation tape every metre or so. I also taped the balun to the mast just in case the wind started rattling it a bit. It was actually a gorgeous sunny day (unusual for the UK in Spring) but the wind was picking up.

Once everything was taped up and a length of coax fitted to the bottom of the balun, I telescoped the mast to its limit and went to get the radio out.

I normally use the Yaesu FT-817 in the garden, but I opted for the superb ICOM IC-7100 because it has a very useful feature to help tune antennas. It has an SWR SCAN mode which takes a number of SWR readings across a frequency range. You can for example take about 7 readings across the entire band or you can opt to take smaller steps across a particular portion of the band that might interest you. I opted to take a few readings across different parts and here are the results...

Each of the screenshots above shows a portion of the 20m band and the centre frequency of the scan is displayed, meaning that you can see 10k readings either side. These readings were taken without the tuner connected.

So, overall I was pretty pleased with the SWR and if I'd have trimmed it a little I could surely have got it 1:1 somewhere on the band, but for now, it's good enough.  Let's get the radio connected!

As I setup the radio, the clouds blew in and covered that glorious sun. So annoying!! Most of the sky was still bright blue, but the light was dimmed by the clouds and it immediately felt 10 degrees colder.

I added power via a 13.2V 8.4A battery and started to tune around. The first station heard was W2RE BOOMING IN from the east coast of America with lovely levels of quieting. I was surprised at how low the noise was with this vertical because everything I've read about them said they could be quite noisy. 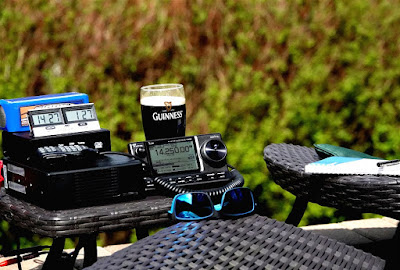 I spent quite a long time trying to reach Ray, but he just couldn't catch my QRP transmissions. I don't think it was anything to do with the antenna - he was just being swamped with lots of QRO operators. Eventually I decided to move on and see who else was out there.

There were LOTS of Europeans and they were all contesting, so every report was, of course, 59. Having said that, I could hear them all superbly and had little problem speaking with them.

It quickly got cold and so I decided to conclude the experiment in favour of some late lunch. Just as I was starting to wrap it up, I heard Jesus calling! So I went back on and got him in the logbook! Praise be the Lord (or EC1KR). 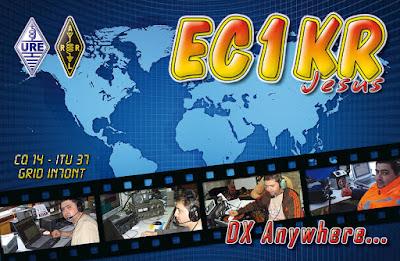 I left the antenna erected and will go back to it over the next few days. I had previously spent time fully waterproofing the LDG Balun, so no harm would befall that if it rained overnight.

So in summary, I'm really pleased with today's little experiment and pleasantly surprised with the results. I feel confident that this will operate fantastically well up on the hills and is far more convenient to erect than a dipole.

So a big thumbs up from me.


This design is based on a post by Peter Miles 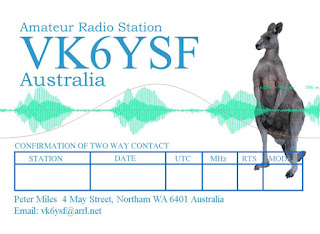 Good evening Tom, very nice rundown on the antenna adventure and it's so true that when you put an antenna together and see it work it is a great feeling. It's great the 7100 can give a sweep regarding the SWR. I have both the MFJ and Funk antenna analyzers. I have used both devices and they sure are very handy when doing antenna work.
73 stay safe and get back on the radio as you have the 12 disciples to contact now!
Mike
VE9KK

Thanks for visiting Mike. I really enjoyed yesterday - it took my mind off everything and I felt a (small) sense of achievement. I might do a 40M version with my 7M mast.