The Kenwood TS-590SG built-in tuner is pretty awesome, but it just cannot find a tune for 160 or 80M on my EFHW.  It manages fine on all other bands right up to 6M, but not at the other end of the scale. I don't use 160/80 that much but I don't like the idea of being restricted.

I connected my LDG AT-200 PRO and that could find a match anywhere but it's quite old and clunky and there's no integration with the TS-590SG.  It's also the least intuitive ATU I've ever come across!

So, I searched for a cheap modern solution and found it in the MAT-TUNER mAT-K100 which comes as standard with a Kenwood interface. You can also buy an Icom interface which makes it a little more versatile. I think the Icom cable costs about £20.

ML&S, RadioWorld, Lamco, were asking £189 for the K100 but Moonraker had them up for sale at £149 so that was a no-brainer!  Waters & Stanton (and associated Nevada) don't appear to sell MAT tuners any more. 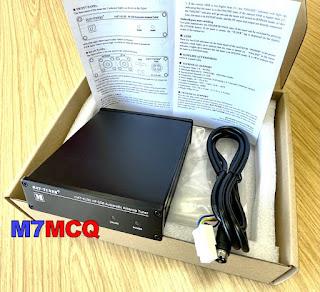 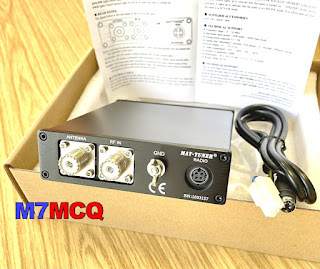 The parcel arrived quickly and well packed. It included the tuner, the Kenwood interface lead and the operating guide. The unit is very compact which suits my small shack perfectly. The construction quality of the mAT-K100 looked pretty darned good, with a real nice milled aluminium finish - better I'd say than any of my LDG tuners. 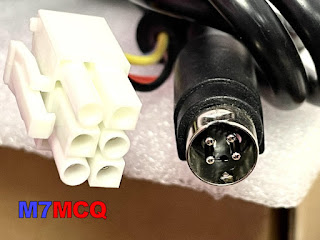 On the front panel are two simple LEDs and around the back you have a couple of SO-239s, a GND lug and the 4-pin interface socket. I was pleased to see that the 4 pins in the connector were quite substantial and not the usual ones which feel like they're made from "fuse-wire" :-)

Once I'd detached the AT-200PRO and installed the mAT-K100, it was time for testing. Needless to say, the integration with the 590 was perfect. There are no buttons to press on the K100; it's all done from the radio's AT button. A simple press-hold sets off the tuner and quickly finds a match, which is then stored in one of the K100's 16,000 memories! 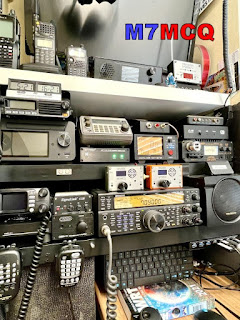 Tuning speed is impressively fast, but a full tune from scratch might take up to 5 seconds depending, of course, on how close to resonance your antenna is. All matches are stored in memory and recalled with lightning speed when needed. It pays to run through all the bands at various locations (CW area, PSK, FT8, Phone, etc) so that tuning time is minimised because you've already tuned there and it's all in memory.

A small but valuable feature is this ATU is powered from the radio, so no need to faff around connecting it to a DC supply.

The MAT-TUNER mAT-K100 looks great, works VERY well and is relatively cheap at Moonraker's price. I especially like the fact that it is so very well integrated with the Kenwood (and presumably the Icom range) which means that you can just totally forget it's there!

Looks like a very nice and well designed antennatuner. But remember that it will not compensate the loss in your coax. Preferable a tuner should be at the feedpoint of a antenna. Unfortunately that brings on some other technical issues, some of them unexpected )my experience'. Good luck. 73, Bas

Hi Bas, thanks for visiting the blog. Thankfully, the EFHW feedpoint is only a few feet away from the shack so coax-loss shouldn't be a major issue, thankfully.