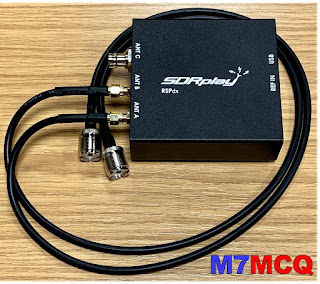 When it comes to low-cost SDR's, there's an amazing choice out there and ShortWave Listeners have never had it so good. The quality and feature set available for just a few pounds (or dollars) is a dream come true, so let's just thank our lucky stars that technology has moved on so rapidly in the last few years.

Personally, I've used the SDRPLAY RSP1A for a few years now and it's provided everything I've needed. Since getting an ICOM IC-7300, it has been permanently assigned to the shack acting as a big-screen panadapter and waterfall, using the RadioAnalog PTRX-7300 interface module.

My old RSP1A was fitted with a plastic case which I quickly discarded and replaced with a dedicated metal case from a Chinese eBay seller. It was a very high quality bit of kit and represented great value for money. 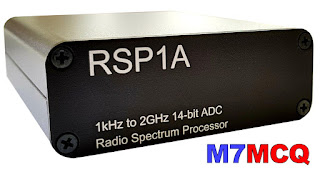 With the RSP1A permanently attached to the IC-7300, it was time to look at buying another one for general Shortwave Listening duties elsewhere in the house. When I started looking on the SDRPLAY website, I noticed that they had a brand new model out called the RSPDX so I decided to take a closer look at it.

The RSPdx is a replacement for the RSP2 range. The first thing which struck me was that it was twice the price of an RSP1A so I was intrigued to know why! Maybe it has 2 tuners inside like the DUO model??

Well it turns out that it's only a single-tuner device but it is has higher specs than all the other models. In particular, the front-end has been totally redesigned with new filters and special attention has been paid to the frequencies below 2MHz!

This change to the RSP range is significant because it's the weakest area of the SDRPLAY products. Having an extremely wideband receiver (1kHz to 2GHz) means that compromises must be made somewhere and it seemed to hit hardest (to me at least) in the lowest part of the spectrum where all the broadcast DX stations live. Even strong, relatively local station like BBC R4 198 sounded quite poor.

Well that's all behind us now that SDRPLAY have redesigned the receiver and added a new "HDR" mode which makes a dramatic improvement on MW/LW. But the HF frequencies benefit greatly from the improvements too!

Is it twice the radio that the RSP1A is?? No, but if you want the best performance from something with huge frequency coverage, then the RSPdx is the one to consider. Before the RSPdx came out, narrower-band SDR dongles like the AirSpy Discovery were more sensitive than SDRPLAY's offerings, but then you lost all that 30MHz-2GHz.  Now you don't have to compromise at all.

Another thing I like about the RSPdx (apart from it coming from the factory in a nice steel case) is the fact that it has THREE antenna ports. This is perfect for me because I have a G5RV, a Discone and an AOR SA-7000. Switching between the three is an absolute doddle and it frequently surprises me how much the signal is improved by switching (even when it sometimes doesn't even make sense)!

In order to take advantage of the RSPdx's features, you need to run the company's own software, SDR UNO. At the time of writing, it's up to V1.4 and it provides access to the receiver's HDR mode.

I know that some of my friends don't like the UNO software because it requires some investment of time to learn it and properly understand it. But if you do get to grips with it, there's nothing quite like it for what is essentially free software. 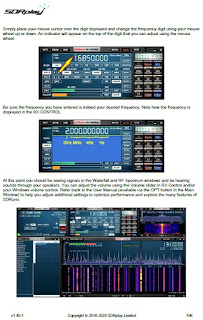 I bought the device from Martin Lynch & Sons in the UK and it arrived two days later. I must admit, I was disappointed to see that it arrived in a pretty flimsy Jiffy-Bag which could afford little protection against the usual rough handling dished out by couriers. The £200 device itself is in a very thin, non-padded box, so as far as I'm concerned it needed to be slightly better packed for the 200 mile journey. 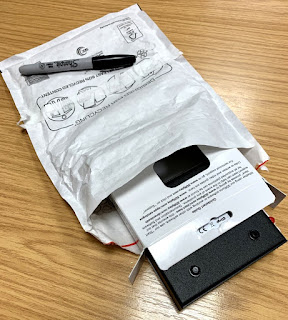 The package also contained a couple of patch leads (ordered separately) which could easily have caused damage to the thin packaging. Anyway, I guess I'd better stop moaning about resellers - it never makes any difference to the way they operate.

Before connecting to my laptop, I decided to open up the box to marvel at all the internal goodies that made up this 200 quid receiver. Hmmm, I guess you're paying for the development that goes into them, not the components 😂😂 There are cheaper SDR receiver manufacturers out there, for sure, but none (IMHO) who provide as much support to the community. I think it's important to repay the efforts of companies like this. It makes them stronger, which in turn results in newer and better products for us. 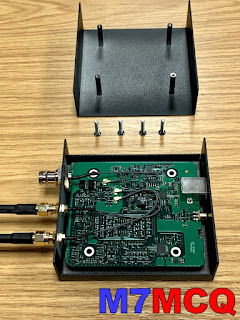 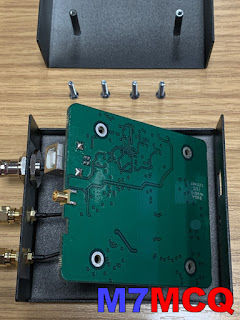 With everything connected up, I pressed UNO's play button and delved into the MW/LW sectors to see how much better it was than my trusty RSP1A. And yes, in HDR mode, it was much better! It made Broadcast dxing far more enjoyable.

And even above 2MHz everything HF seemed that bit better on the ears and easier to pick out weaker stations. And the Notch Filters work superbly for me, making a dramatic difference.

I'm quite happy with this purchase. Would I have been better off buying the £100 RSP1A and spending the remaining £100 on an additional antenna? I don't think so. I've spent about £400 on the three antennas already and I can't invest in any beams because of housing/planning restrictions.

So overall, I think I made the right choice. It's the very latest incarnation from SDRplay and the hardware will be future-proof for a good while. The UNO software improves month on month and those improvements will only get better with V1.4's addition of a "Plug-In" which gives 3rd Party software writers the ability to add more features like the new ones included in the latest release (eg DAB).

HERE is a comprehensive review of the RSPDX by Mike Richards in the RadCom magazine January 2020. Bear in mind though, that this review was done with a pre-1.4  version of SDRuno.