TO BE OR NOT TO BE 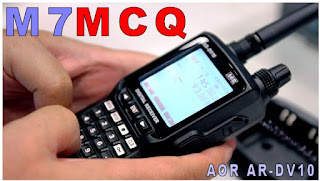 That most definitely is the question as far as this radio goes! The DV10 has many enemies it seems and I need to find out which side I'm on, before the 14 days returns period expires.

I've fancied the AOR AR-DV10 for a couple of years - it seemed like an SWL dream machine in a compact, take anywhere package. Not only does it cover 100kHz to 1300MHz with CW, LSB, USB AM and FM modes, but it also included all the popular digital modes including C4FM, DSTAR, DMR, TETRA and more!

It all sounds fabulous, but the radio came in for harsh criticism just after launch due to the fact that it went slightly off frequency as it warmed up 😮 Not what you want when you've just laid out a grand, is it?

Before we move onto the performance of the radio, let's take a look at the kit itself. I was surprised to discover that AOR have teamed up with Yaesu to make this "state of the art" receiver and  I can't believe how I'd not noticed before that the AOR AR-DV10 shares the same case as my Yaesu FT-550! 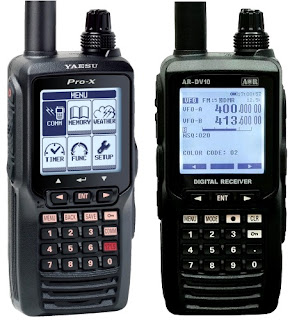 Side by side, they're almost indistinguishable. That's not a bad thing - I've previously boasted about the Yaesu's FT-550's superb build and finish. The AR-DV10 feels equally lush. It also means that I get to share the Yaesu's accessories (such as battery and chargers) with the AOR. They're perfectly interchangeable. 👍

Having applauded the benefits of the matching radios, I should also admit to being ever so slightly miffed by the fact that these two radios, stood side by side look identical but one costs £155 and the other costs £995 👎

That's a serious difference! And bear in mind that the FT-550 is also a transmitter! So considering the two radios share the same case and the same screen, I'm hoping that what's inside the AR-DV10 is mighty special.

The AOR AR-DV10 is a full Software Defined Radio radio with an IF of 47.25MHz. The radio features revolutionary features such as automatic recognition and decoding of multi-digital modes including the ever popular DSTAR, DMR and Yaesu's System Fusion, thanks to the use of an Altera Cyclone IV FPGA and Analog Devices Blackfin DSP for demodulation. A new firmware update enables traffic channel decoding of TETRA trunking networks - the first handheld radio in the world to offer this!

The unit has a good sized screen (2.4") but it is rather low resolution (160x160 dot matrix LCD)  and it's monochrome. Again, this is quite surprising considering the cost of this AOR flagship handheld. My Kenwood D74 on the other hand, has a small but lovely, full colour, high resolution screen and my Yaesu FT3D also has a nice colour, touch screen. So there's a bit of a negative straight away.

I'm beginning to think that maybe AOR and Yaesu have tried to make some cost-cuts by giving the design-engineers a case, a screen and a PCB and telling them to work to those dimensions and not a mm more. The savings in tooling costs alone would be very significant.

Another bit of a puzzler, is the fact that this wideband, all mode communications receiver doesn't have an internal ferrite antenna (the Kenwood D74 does). In fact, the supplied rubber duck antenna only covers the airband! You do get a separate telescopic whip, but I'm surprised by the omission of the ferrite rod and suspect that it's something to do with the self-imposed restrictions of using an existing case instead if giving the designers free reign.

Like the FT-550, the AOR AR-DV10 feels substantial in the hand - it's bigger than most handhelds you've probably come across. The screen looks big and the controls are well spaced and functional. The buttons on the front are easy to press even with gloves on and they are backlit for ease of operation in dark conditions.

One of those buttons is the RECORD button which allows you to record sessions to a built-in SD Card and listen back at a later date. You can listen to your recordings from the AR-DV10 itself or from a PC and even play I/Q recordings back through some SDR software and examine the full bandwidth of the recording. 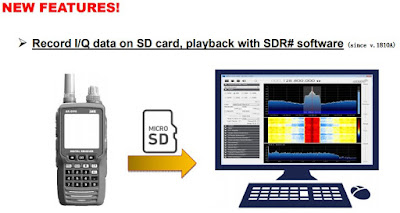 The radio is waterproof and is rated to IPX5 as long as the battery is fitted, so no need to worry about using it when the rains starts. Because of the incredible expense of the unit, I would strongly recommend a leather case for it. I recently 'tipped over' my FT3D and it marked it quite badly - gutted!! 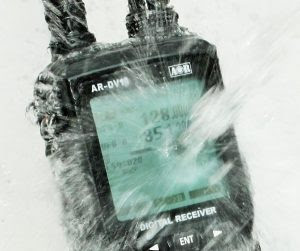 Like the FT-550, the receiver comes with lots of stuff in the box, meaning that you don't have to spend extra on things like a desktop charger or a cigar-lighter psu lead. They even include an AA Battery tray to sit as a backup to the 7.4V 2000mAh Lithium-Ion Battery. It's kinda what you'd expect with a £1k radio. 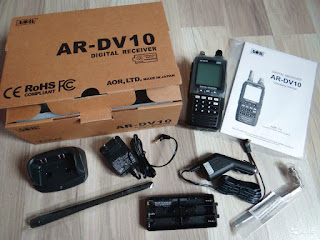 While writing this, I received a telephone call from a UK supplier (who shall remain nameless) who gave me a very different take on the DV10 that Waters & Stanton gave me. In the email from W&S, they said the following....

Hi Tom, the DV-10 attracted bad press at it launch because of a few issues with drift and decoding.  Since then there have been several firmware update and hardware changes.  As a result the issues reported at the launch have now gone.

AOR are constantly looking at ways to update the radio which is done through firmware update.  The most recent to the performance of Tetra. Be very wary of internet and social media reports are many are the original issues recycled due to the ignorance of the current state of play.

Now that's a very bold and confident statement to make in writing when you are responding to a customer request for assurance that these issues have been resolved. It's a statement which is the absolute opposite to the other supplier's opinion on the radio.

The trouble is, there is no other handheld radio in the world which boasts all the features of the AR-DV10, so it's not like I can opt for a different make/model instead. I'm going to have to test this one carefully and see if it does what I want it to do.

The main area of interest apart from the multi-mode wideband receive, is the ability to listen to DMR, DSTAR and C4FM. Give me all that in one small package and I'm happy. Having paid a small fortune, I'd also like the TETRA to work and (obviously) I want there to be no frequency stability issues.

Back soon after testing!

UPDATE : Well, that didn't last long - it's been returned for a refund. Absolutely dreadful performance! Not only was it poor at decoding anything but a very strong local digital signal, but it was also incredibly insensitive on other bands too. A C4FM gateway just around the corner worked well but the digital repeaters in the area could not be decoded no matter which antenna I used.

I pitched it mainly against my  30yr old AOR AR3000A. In all tests, the DV10 came out worst. I tried it with the supplied antennas (swapping them between the DV10 and the 3000) and then with a colinear. My final tests were with the AOR SA-7000 wideband antenna.

No matter what I tried, the DV10 was outshone by the old AR3000A. I really wanted this to work, because there's no other receiver below £1200 can do everything the DV10 can (supposedly) do.

I've watched many blogs and belong to at least 3 different AR DV-10 groups as my intention of purchasing one. I've seen all kinds of reports from customers. Many complaints from early purchasers to several likes by recent customers. I'm thinking it's quite a gamble for a purchase. I feel this would all resolve itself if AOR would re-engineer the bad components with better, then call it the MK-2

It IS a gamble and not a good one. I'd stay well clear of it. But you're right - AOR really do need to get a grip of this situation because whether they care to admit it or not, they've got things wrong with the DV10. How the hell can a 30yr old scanner beat this modern receiver??

It would DEFINITELY help if they sorted it out and (as you suggest) launch it as the Mk2.

Thanks for visiting the Blog.