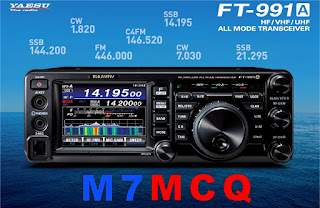 JUST MY OPINION! One of the local radio clubs is about to set up a new Fusion Repeater when the lockdown is over, and being just 7 miles away from my QTH I was thinking that this may be my route into C4FM operation using RF instead of my usual access point - an OpenSpot and internet. There's no guarantee of course that I'll be able to reach the repeater, but the fact that I can access other UHF repeaters such as Blackpool, some 26 miles away, gives me hope.

Currently I have an Alinco DR735 2M/70cm radio in the shack and as much as I love this wonderful radio, it does bug me that I can't work sideband. So I figured that now's the time to kill two birds with one stone - get a new radio which does both sideband and Fusion. So I ordered a used Yaesu FT-991A from a big online reseller after checking that the parcel would definitely go out that day and arrive the next morning, Thursday, before 12noon.

Annoyingly(!) the next day I got a call to say that the radio would  not arrive until Friday. I pointed out that I had specifically checked the delivery date before ordering and was told that I must have spoken to a member of staff who wasn't aware of the delivery schedule. And also, the V2000 antenna I'd ordered which was showing as "in stock" was actually out of stock!

I don't mind one bit waiting for something that is scheduled for delivery in 3 days time, 3 weeks time or even 3 months time  IF  I am told that date. But when you've been told NEXT DAY delivery and have PAID for next day delivery (£20 in this case), then I do expect next day delivery. Why can online resellers not get this bit right??? 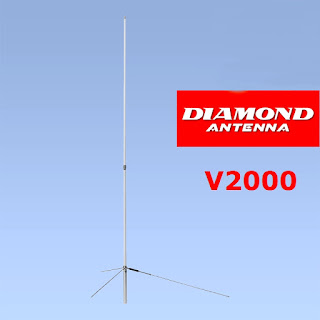 When the Diamond V2000 arrives (found one in stock at ML&S) it will give me all three bands on one antenna which (assuming it works well) is a godsend. In the past I've had to either use my EFHW or erect a separate 6M temporary antenna in the garden. 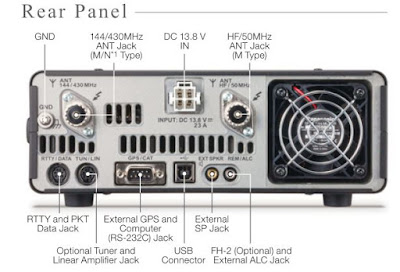 The FT-991A reminds me very much of the old FT-897D. I love those radios - they just had a great look about them - a military ruggedness almost. And of course they were a 'shack-in-a-box' with all bands and all modes and 100W HF, 50W VHF, 20W UHF.

The 991A is the modern day equivalent, with 100W HF and 50W on both VHF and UHF. It also adds the increasingly popular C4FM Digital mode. Of course other modes include SSB, CW, AM, FM and RTTY.

Instead of the tiny monochrome screen of the 897, the 991 comes with a beautiful TFT colour touch-screen. It's around 3.5" diagonally which is big enough for all but the most ham-fisted operators (pardon the pun).  The main frequency is displayed clearly and boldly at the top of the screen, with a smaller indication of VFO-B frequency below. 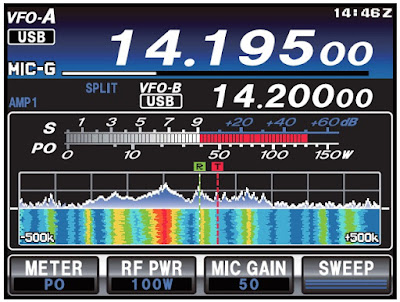 Below that is the S-Meter which doubles up as a secondary meter which can be switched between Power, SWR, ALC, etc by the touch of a button. Speaking of buttons, the display always shows four buttons at the bottom and these can be altered to suit your individual requirements.

In the middle sits a real-time Spectrum Scope and Waterfall which looks pretty cool. It looks fairly 'lo-res' compared to the superb IC-7610, but hey, there's a big difference in price LOL. 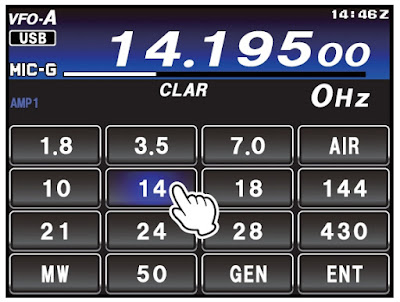 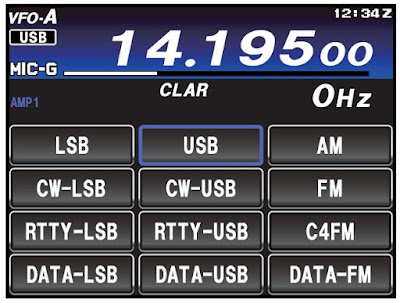 Band selection and Mode selection is made by pressing the relevant button to the right of the screen and then choosing your option by pressing one of the virtual buttons onscreen. Very simple and effective.

Band-stacking is also provided by adding your three favourite parts of the band and then cycling through them by repeated presses on the relevant frequency. I like this feature and always make sure that the first frequency in stacks is the QRP frequency of each band.

What I don't particularly like is the TX INDICATOR which is over to the right of the main screen. It's a red LED which to me, is not particularly bright. When I'm operating a radio, I tend to always have my eyes on the main screen and when you press the PTT nothing really alters there. It's just a personal preference, but I would always like a big change during transmit - like the screen going predominantly red or something like that. Ah well, that's just me.

One more nice feature (as far as I'm concerned) is the inclusion of the AirBand. I'm not an avid listener, but I often have it on in the background if I'm doing something in the shack other than amateur radio.

So that's it for now. I'm quite pleased with my choice of radio for this part of the shack and I hope it lives up to my expectations. I'll update in a few weeks. 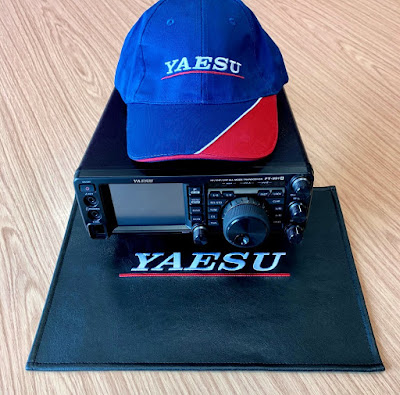 UPDATE :
The FT-991A has disappointed me somewhat (even though there's a lot about it that I like). The lack of DualBand is a pain in the ass - I can't monitor say 2M & 70cm 😒
I also can't believe the FT-991A's Wires-X limitations 😮
Yaesu's flagship C4FM radio, the FT-991A should be everything you need surely??  Well apparently not, because the FT-991A is not really equipped to be considered as Yaesu's 'flagship' C4FM radio despite its £1300 price tag!
If you want to connect your radio to a PC and use the Wires-X software (which I often do), then you'd better look elsewhere, because the firmware architecture of the FT-991A doesn't really permit this. It's just too old hat. There needs to be a 991B introduced. 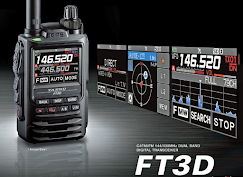 The only way that I can use the Wires-X software on my PC is by connecting my Yaesu FT3D to the PC in PDN Access Point mode and then using the 991A to  transmit and receive.
So in that configuration, my expensive handheld Fusion radio is tied up in the shack (literally, by cables connecting it to the computer). And it's not just one cable, it's the SCU-19 and a twin audio cable (collectively called the SCU-39 at the princely sum of £70)!!

Thanks for the visit Bas. I've become a bit of an Icom fanboy these days, but I must admit, the 991A is a real good blend of wants and needs. Glad to hear your recommendation of the 2000 antenna! I ALMOST worked a Spanish station last night on 51.510FM - he was 59+++ for around 20 seconds but then faded away before he could catch my callsign.