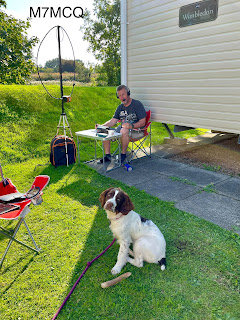 I recently purchased a static caravan holiday home and I had every intention of taking my ICOM IC-705 with me each weekend. And then I thought it would be very convenient if I could leave a radio stored in the caravan permanently, to save lugging one backwards and forwards. And besides, the more times you have to transfer kit in that way, the more likely you are to leave something behind.

So with that in mind, I searched for a cheap, second-hand transceiver. My first thought was to buy an old FT-100 or FT-817, figuring that they would be real cheap, but OMG how wrong was I? There were some right old dogs on sale for crazy prices. I can't believe how much people were asking for radios that could be approaching their 20th birthday 😲

And then I spotted an advert for an FT-857D at £300 - that was more like it! It was described as "cosmetically challenged, but fully functional".

I decided to take a chance on it and after it arrived I started a search for panels to replace the heavily scratched ones. The rest of the radio was in great condition and only needed all the grubbiness cleaning off. I ended up finding a top and bottom cover (separately) for £28, so the total outlay was £328 for a fabulous radio that I could easily sell later for £500-600 💪

The Yaesu FT-857D has never appealed to me previously - I always preferred the 817/818, but I must admit that now I've handled one in the flesh, it's pretty compact and not a great deal bigger or heavier than its little brother - it's only around 6"x9". And when you consider that this is a 100W radio, that's pretty impressive! 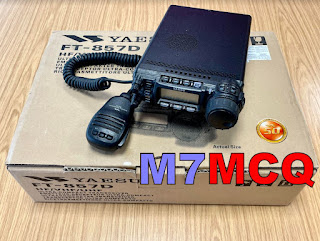 The radio covers HF, 6M, 2M and 70cm, all modes, all bands. It can provide 100W on HF, 50W on VHF and 20W on UHF. It has a detachable head unit and although it's small in size, it has a nice, large VFO knob. The unit feels very well built (just like the FT-818) and the controls don't feel sloppy or loose (even in this well-used example). 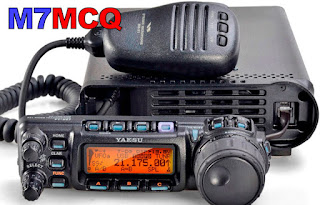 Operation of the 857 could never be described as intuitive - it's just not. You have to invest time in learning your way around things. There aren't many buttons but there are many menus! Luckily for me, I'm totally familiar with it all, since I've previously had an FT-818 and put the time in. But lets not get carried away - it’s not rocket science!! Operation of the radio can be made simpler by switching the standard microphone for a DTMF mic with multiple buttons for direct frequency input and other functions - a very worthwhile purchase (I already had one). 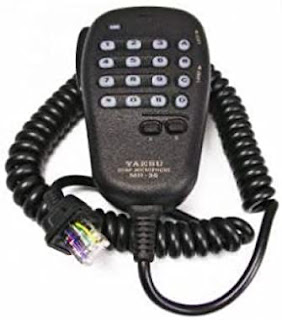 Sensitivity and selectivity of this little marvel is pretty good. Obviously not as good as a KX3 or an IC-705, but it's good enough. The truth is, when you're out and about at high vantage points with a good antenna, sensitivity becomes much less important.
The FT-857D is going to be based at my holiday home in Scorton and will probably never stray further than the local high-spot (Nicky Nook) which is a great place to operate from. Signals are very easy to pick up there and you don't need the best radio in the world to enjoy your day. 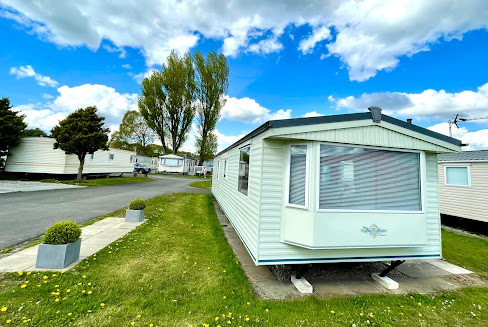 My antenna of choice for the 857 is SotaBeams BandSpringer Midi using one of their telescopic masts. It's a fabulous antenna with great band coverage. 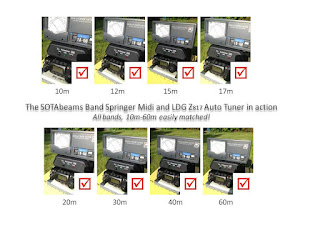 I'll probably leave my AlexLoop HamPack at the caravan too - it's very discreet and shouldn't attract any attention if I want to operate from the caravan. I'll put a Diamond X30 up on the roof for local VHF/UHF chat.

The FT-857D has 32 preset screen-colours and you can adjust these further if you can be bothered. Contrast and brightness are also fully adjustable. Personally I like the Light Blue and the usual Amber-Red. Some people think you can adjust the colours of the backlit buttons, but you can’t.

The screen is far better than the 818 I was used to, so overall I’m very happy with it. Needless to say, it looks ancient next to the 705, but once you’ve got the colour and contrast to your liking, it’s very easy to live with. There’s also a simple spectrum scope on the 857.

Audio on this radio is only ‘average’ due to the tiny built-in speaker, but it’s loud enough even in noisy outdoor environments. Things are improved vastly with an external speaker (which is fine at home but I can’t be bothered with one if I’m going outdoors - in which case I’ll throw a pair of headphones in my rucksack).

The 857D  has useful DSP filters built-in which are very handy and work quite well. There’s also space inside for a further two Collins filters to improve selectivity, but they’re quite expensive and poor value for money as far as I’m concerned.

The VHF & UHF performance is excellent and it’s good to be able to use SSB on these bands. It’s a very flexible radio and an absolute bargain at this price. If I’d bought a minter, it would have cost double or more, and I don’t think I’d have paid that much - I’d have gone for a new 818 instead.

To go with the cheap radio, I needed a cheap ATU and thankfully, my mate Carl offered me an LDG AT-200 for free!! I couldn’t accept it for free, so I gave him a few quid and was very pleased with it. It interfaces perfectly with the FT-857D using a simple 3.5mm to 3.5mm jack-plug lead. This is perfect for use at the caravan, but I I’ll use my Elecraft T1 for outdoor activities. 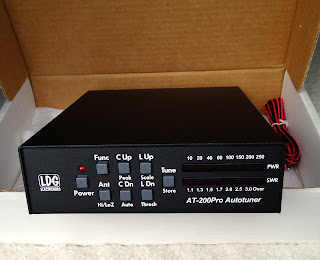 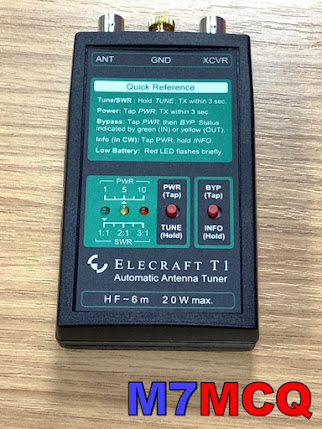 So overall I am really pleased with the FT-857D for the type of work I’ll be doing with it. If I’d only needed HF then I would definitely have opted for an FT-891 because I think that’s a better HF receiver with amazing DSP, but I wanted a complete one-box solution and the 857 gives me that (at a bargain price).

Negatives?? The only real negative is the lack of internal batteries like in the 817/818, but then the size would have increased considerably.

I was chatting with a mate of mine and he mentioned he had an external meter for sale - an LDG FTL Meter which was designed specifically for the Yaesu FT-8XX range. He only wanted £25 for it, so I bought it. Absolute bargain and a lot more readable than the FT-857 meter :-) 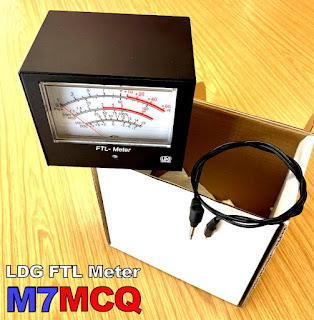