NO SOUND FROM WINDOWS APP

Boy, what a frustrating weekend I've had. No matter what I tried, I just could not get any audio to come from my BlueDV App using my Windows10 Surface Pro7 tablet. It was all the more frustrating because it had worked fine a few weeks ago! 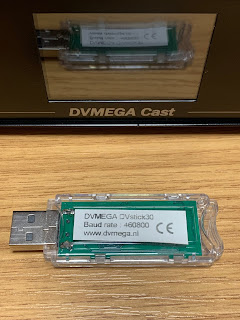 I had tried ALL SORTS of things to remedy the problem and had sought help from the BlueDV User Group on Facebook, but none of the suggestions seemed to help (because I'd tried them all myself).

Thinking that it was because my DVSTICK30 was faulty, I tried it in another PC and was presented with an altogether different problem - the BlueDV software reported that it "can not find com port". So that led me to waste a load of time resolving that issue. This particular problem turned out to be because I was using a Beta version of BDV.

So, knowing that there was nothing wrong with the hardware itself, I switched back to the Surface Pro7 tablet. I performed a Windows Update. I updated the Realtek drivers. Updated the FTDI drivers. I updated everything!!!

And still no audio. When I opened the Windows Volume Mixer, I could see that the BDV App was showing, but there was still no audio from the app even though I could clearly see that someone was transmitting.

Anyway, to cut a L-O-N-G story short, the issue was all down to the fact that I had selected the wrong Model AMBE in the setting page. I had clicked on AMBE3003 instead of AMBE3000 😩 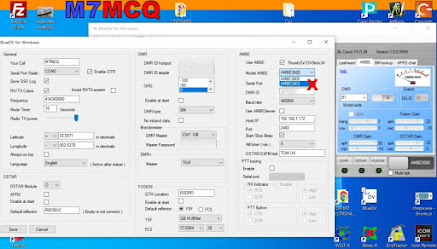 So I'm posting this page to help any other dumbos like me who accidentally click on the wrong option in a drop-down menu. It might save someone a weekend of hair-pulling 😂 At least it's sorted out now and I can enjoy my digital chats again.
Click here if video doesn't play
In case you don't know what a DVSTICK30 is (and BlueDV App), it's a means of connecting to DMR, DSTAR or C4FM digitally without the need for a radio or antenna. You simply plug the DVSTICK30 dongle into a Windows computer, laptop or tablet and run the (free) BlueDV software.

Using your PC's built-in mic/spkr you can start talking to operators around the globe. For those operators who have no repeaters within reach of their QTH (or for those who are not permitted antennas), the DVSTICK30 is a fabulous solution.

Of course, with no RF being involved, you'll come across the usual crowd who love to belittle internet-based radio users, but I just ignore them! At the end of the day, these devices permit  Licensed Amateurs to communicate with one another, when they may not otherwise be able to. How can that be bad?

I have quite a few RF radios and I also have the DVSTICK30, a DVMEGACAST, a DVAP DONGLE and an OpenSpot2. With limited antenna options at home, it's really great to be able to comfortably have chinwags with operators from every corner of the globe

Thanks for visiting - please take a minute to leave a comment below
73, Tom, M7MCQ.

Email ThisBlogThis!Share to TwitterShare to FacebookShare to Pinterest
Labels: bluedv, dvstick30, no audio, no sound from windows apps

M7MCQ - LOC=IO83RO - WAB SQ=SD61
CQ ZONE=14 ITU ZONE=27
POSTCODE=BL6
Thanks for visiting! This blog started out as a "Radio Blog" but I now post virtually anything on here relating to my (many) hobbies.
When it comes to HAM RADIO, this blog is here in the hope that some newbies will learn from either my mistakes or my successes. Experienced Hams will probably find it all very boring.
I've been a Shortwave Listener of sorts for many years and I've been interested in radio since being a child growing up in the 60's. Although not blessed with great intelligence(lol), I've always been interested in the technical workings of the things around me.
In the 90's I considered taking the Amateur course at the local college but it was a very long-winded affair and I just couldn't afford the time. But now I've got more leisure time, I took the Foundation Course at West Manchester Radio Club and passed the exam on the 21st Feb 2019. I may now move on to studying for the more advanced "intermediate" stage.
My main area of interest will be Low Power and I can merge my interest in radio with my interest in hill walking. My QTH close to the West Pennine Moors means that I'm conveniently placed for many great walks and lofty take-offs. I'm also a short drive away from the Lake District and the Yorkshire Dales.
Being a biker, it's easy to throw on a small rucksack loaded with my tiny IC-705 radio and a 20/40M BandHopper2 and quickly get to some interesting places for a bit of QRP DXing or SOTA work. I'm also interested in DSTAR and other digital modes. DIY Antennas is something that tickles my fancy too!
Thanks for checking out my blog - I will hopefully chat on the air with you sometime.
73's