BUT IS IT THE GREATEST? Well it's a far cry from the very first offering from Microsoft way back in 1982! Looking back at an early screenshot, it seems incredible that we even bothered to load it, let alone pay for it! But back then, it was every bit as "cutting edge" as the 2020 version is. 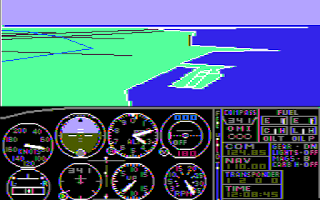 1982 FlightSim
When it comes to sims, I've always preferred to play with CombatSims like Falcon, LockOn and more recently DCS WORLD. I do own a copy of X-PLANE and have bought a study-level GA, but never really got too far into it. I've also owned a few Microsoft Flight Simulator versions over the years, but in the main, I prefer military aircraft over civil.
When I first heard about MSFS2020, my ears pricked up a bit, not least of all because of the stunning graphics and live streaming of ground mapping data. This introduces realism at a whole new level. IN THEORY it meant that when you fly over one of your known local landmarks (such as Winter Hill in Bolton), you should see it on the ground. WOW!!
It hasn't quite worked out that way. But damn it's good! 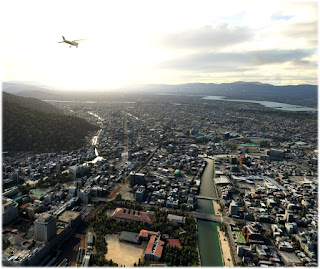 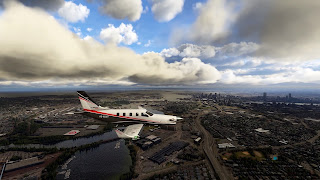 The graphics are simply stunning!!! Not just the flyable aircraft, but the airports too. And the general scenery and the weather and the 'objects' scattered around, here, there and everywhere. 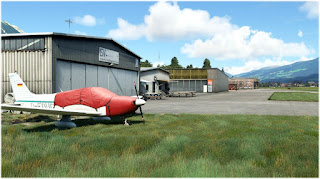 I opted for the Premium Deluxe version of Flight Simulator because when you buy the basic version, you only end up spending extra on more planes and airports anyway! I also opted for a physical DVD version instead of a mega digital download. And then I upgraded a couple of airports using ORBX. 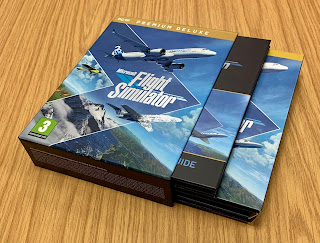 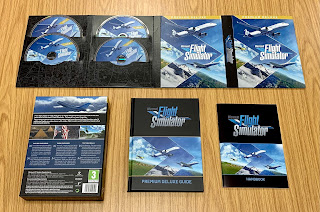 10 x DVD's!!!
Anyway, the point of this post is to show some doubters that this massive simulation will run perfectly well and without any hitches or problems on a decent PC and I don't mean one with an i9-Extreme CPU and a GeForce 24Gb RTX3090 !
So let me tell you the spec of my PC so that you can make comparisons... 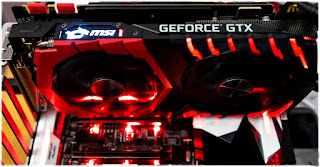 So yes, it's a nice computer, but it's not a beast or anything. Before I installed FS2020, I was honestly thinking I was going to be disappointed and after reading all the complaints about stuttering and FPS figures only just getting into double figures, I envisaged an evening of pushing sliders back and switching off a lot of eye-candy 😨 There's lots of videos online showing people doing their best to tweak the sim so that they can achieve a steady 30fps.
On with the installation - I should say that even though I had DVD's it still took an incredible 5 hours to complete the installation and even then I had to download a further 100Gb of up to date data before I could run the sim 😵. Oh by the way, I installed the sim on its own dedicated 500Gb SSD.
Once it was up and running, I went into the settings and saw that the software had estimated which settings I should use based on the hardware it had found. To my amazement, it had selected ULTRA for everything!
Despite what the software thought of my PC, I was still rather sceptical. As recommended, I chose to start my first flight from a very busy and visually complex airport in order to get a true picture of what my PC could handle. I also made a point of using an aircraft with a glass cockpit instead of steam gauges. 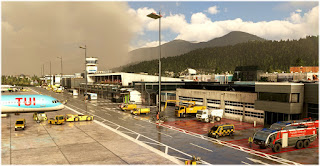 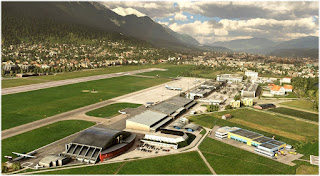 Once in the cockpit, I found that I was in the mid-40 fps and everything was supremely smooth. There were no hiccups, no delays and no stuttering, even when I spun my views around and around. Up in the air, it was the same - no issues whatsoever and never once did the fps drop below 40. I purposely flew through clouds, flew past magnificently complex scenery, taxied past some of the most realistic (and heavily populated) airports I've seen.

So based on this experience, I have to say that I don't understand why some people who claim to have very high-end PC's are struggling and criticising Microsoft. Sure, if your PC is getting a bit long in the tooth, then you're going to have a dreadful experience - this is, after all, an incredibly complex and demanding sim. Now it's a fact that Microsoft have not yet developed this sim sufficiently enough to take advantage of ultra-modern, high-end GPU's, but this will improve over the coming months hopefully. 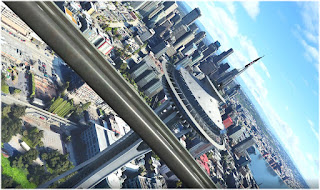 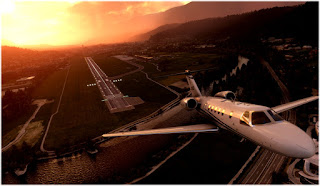 Is FS2020 better than XPLANE?? I'm not even going there! I'm a flightsim hobbyist and not one of these techno-geeks who will tell you it's all about the flight model and not the graphics. My enjoyment is somewhere in-between the two. For me, FS2020 is a whole lot of enjoyable fun!!
I even got my Amateur Radio callsign on the aircraft 😂....
UPDATE : 24 Nov 2020
I have decided to change my monitor to give me 4K Ultra High Def. This will make FS2020 look absolutely awesome but it will mean that the GPU will need an upgrade if I want to have everything maxed out at that resolution (3840 x 2160).
So the only real card to buy is the Nvidia RTX 3080 but availability is simply shocking!!! Anyway, I eventually managed to get my hands on a new ASUS RTX 3080 TUF OC 10GB but it cost me £100 over RRP (robbing b'stards)!! This is the OverClocked version and is about as good as it gets for the money. 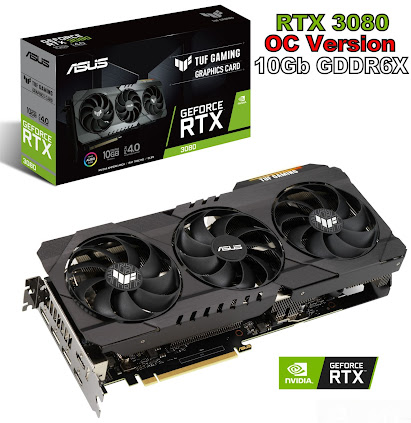 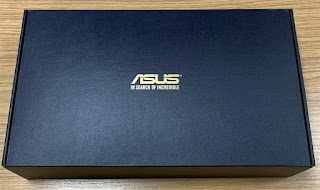 It's a monster of a card and is all-metal construction. It weighs a ton and one does worry about the weight of such a beast - I feel like it could do with a vertical support at the end of it.
Performance is a given at this spec - it just screams along at a blistering pace no matter what you throw at it. You can get as much as 150fps in some games at ULTRA settings, but FS2020 is still really in development and has yet to be optimised to take advantage of these new video cards. It will no doubt get better as time moves on and updates improve efficiency. Still, it looks like liquid silk with absolutely everything maxed to the hilt.

The temperature control of this particular card is pretty spectacular! It runs cooler than my 1080Ti - no matter what you throw at it. The only down side (apart from the eye-watering price) is the power consumption. There's no such thing as a 'green' game PC anymore 😂
My only concern is that the Intel i7 9700k CPU will be the next bottleneck. And the fact that my Z390 ROG STRIX MotherBoard only has PCIE-3 slot for the GPU when it should really be a PCIE-4. It is, of course, backward compatible, but it means that I'm not squeezing every ounce out of that card.
FULL REVIEWS HERE 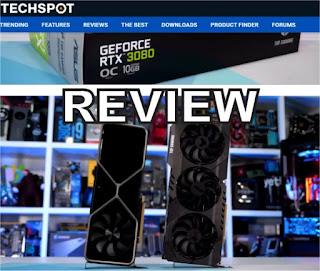 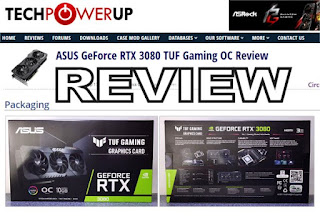 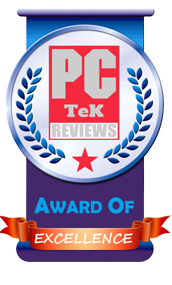 M7MCQ - LOC=IO83RO - WAB SQ=SD61
CQ ZONE=14 ITU ZONE=27
POSTCODE=BL6
Thanks for visiting! This blog started out as a "Radio Blog" but I now post virtually anything on here relating to my (many) hobbies. I guess it's a bit of a diary which no one reads but myself. So why post it? I don't really know LOL.
When it comes to HAM RADIO, this blog is here in the hope that some newbies will learn from either my mistakes or my successes. Experienced Hams will probably find it all very boring.
I've been a Shortwave Listener of sorts for many years and I've been interested in radio since being a child growing up in the 60's. Although not blessed with great intelligence(lol), I've always been interested in the technical workings of the things around me.
In the 90's I considered taking the Amateur course at the local college but it was a very long-winded affair and I just couldn't afford the time. But now I've got more leisure time, I took the Foundation Course at West Manchester Radio Club and passed the exam on the 21st Feb 2019. I may now move on to studying for the more advanced "intermediate" stage.
My main area of interest will be Low Power and I can merge my interest in radio with my interest in hill walking. My QTH close to the West Pennine Moors means that I'm conveniently placed for many great walks and lofty take-offs. I'm also a short drive away from the Lake District and the Yorkshire Dales.
Being a biker, it's easy to throw on a small rucksack loaded with my tiny HF/2M KX3 and a 20/40M BandHopper2 and quickly get to some interesting places for a bit of QRP DXing or SOTA work. I'm also interested in DSTAR and other digital modes. DIY Antennas is something that tickles my fancy too!
Thanks for checking out my blog - I will hopefully chat on the air with you sometime.
73's